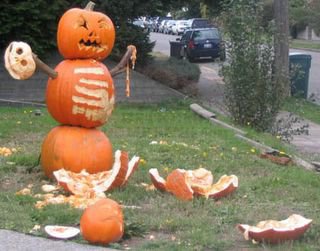 In light of the Halloween spirit, I'll share this. Some of these made me laugh out loud.

My favorite is above.
Read the rest!

One of the nice things about hosting a party is that my house is cleaner after the party than it was before I started cleaning up for the party.

Too bad I forgot to take pictures of everyone in costume :(. I got new bayyeries for the camera, loaded them, had a blank memory card in it, set it out on the counter and forgot about it. But I did find out that I have 2 camera bags... don't ask why.

One of my co-workers won the costume contest for her Hermoine Granger contest, and won it by a wide margin... though my sheep did get one vote. Not my sheep costume... my sheep with the fang marks to show that I was a Scottish vampire.

It was fairly quiet for a party, with only 8 of us (not counting the sheep), but it was pretty good. Of course, now I have junk food and beer left for the rest of the week, as well as a half gallon of Green Stuff (we drank 1.5 gallons). And now Pickles can no longer say Weasel isn't real. :)
Read the rest!

This one looks pretty accurate...

Stability results were high which suggests you are very relaxed, calm, secure, and optimistic..

Orderliness results were medium which suggests you are moderately organized, hard working, and reliable while still remaining flexible, efficient, and fun.

Extraversion results were moderately low which suggests you are reclusive, quiet, unassertive, and secretive.

introverted, secretive, reclusive, tough, non social, observer, fearless, solitary, libertarian, detached, does not like to lead, outsider, abides the rules, mind over heart, good at saving money, does not like to stand out, does not make friends easily, self sufficient, not aggressive, likes the unknown, unconcerned with external opinion, strong, abstract, independent, very intellectual, analytical, high self control
Read the rest!


What is Your Celtic Horoscope?

All Halloween stores seem to be supplied by the same vendor. Not just the stores under the same company... all of them. They all have the same stuff for the most part.

And of course, by "same stuff" I mean "not the part I'm looking for".

I was going to dress as a Rim World Shepherd (Firefly/Serenity). Looks like I'll have to fall back on my original idea. :(
Read the rest!

I am chewing over what systems to use in upcoming games. For most genres, d20 has been my mainstay, but I run into a problem as the characters get up in levels... their hit points go through the roof.

While this is okay in certain campaigns, like my Mything* D&D campaign, where the characters are approaching the status of epic heroes, or my Dark Incarnations Star Wars d20 game, there are other genres where having more hit points than a roided-out elephant takes something away. That guy with the gun isn't a credible threat if the gun does 2d6 and you have 80 hit points. Even a maxed out critical hit would only do 24.

Another system, RoleMaster solves the HP dilemma with a highly ransom system that includes instantly lethal critical hits. If that goblin with a dagger rolls lucky, your 200 hp dwarf is dead. While this is certainly more realistic, it can make players with high level characters more afraid to take chances.

What I'm leaning towards for the next d20 system campaign I run is to give all characters their Constitution as their base hitpoints with a hit point bonus determined by class and level similar to the way Base Attack Bonus, Saves Bonuses, and (in non D&D) Defense Bonus are determined. I haven't settled on the exact amount yet... I am leaning towards the equivalent of 1 (old) hit die per 5 or 10 levels.

Now, this probably wouldn't be feasible for an actual D&D campaign... a 10th level wizard's fireball averages 35 points of damage. But in genres where the ability to deal damage does not ramp up with levels, such as Modern d20 campaigns, this might prove a viable alternative.

I should note, I did not think up this HP Bonus thing myself. I think I read it in Unearthed Arcana.

* No relation to Robert Asprin's Myth series.
Read the rest!

Ok, you probably won't get this if you aren't familiar with MMORPGs and the plague that is known as l33t speak.

But if you are, and especially if you've played World of Warcraft, you may find this humorous.
Read the rest!

Remember in Star Trek IV: Save the Whales, when Scotty offers up the secret of transparent aluminum? Turns out, that wasn't so far fetched (the aluminum part, not the time-travelling to save the world from killer-space-whales part).

Why was I shopping for hats? Because characters in a story I am working on wear hats, and while I can "see" what they look like, I was having a great deal of trouble describing them.

Why would the kind of people who read my blog care about hats? Three words.

Along with my accident report in the mail, I've started receiving advertisements from lawyers.
Read the rest! 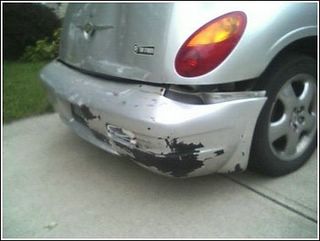 I got out of work with some time to kill. I figured I'd stop by the grocery store then head home to get some extra time to chill before my friends showed up for my Firefly game.

*Rattle* *clatter* That not what runes say!

I was sitting in traffic on East Washington St. at a stoplight when I glanced into my rearview mirror and saw a van bearing down on me way too fast to stop. I had enough time to realize I was going to get hit and that trying to creep forward would only mean my brakes wouldn't be engaged at impact. I held on and hoped I wouldn't get mangled.

The impact pushed my car forward into the van in front of me, but my front bumper soaked all of that collision so that the front van wasn't even damaged. I remeber hoping that the airbags wouldn't deploy (they didn't).

Initially my rear bumper was pushed up under the car and against the tire on the passenger side, but the tow truck driver managed to pull it back out so that I could drive.

My boss tried to convince me I should go to the hospital... needless to say that's not big on my agenda. Instead I'll atke two aspirin and drink some beer.
Read the rest! 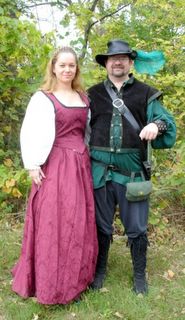 My friend Nicole and I at the Ren Faire. Am I smiling or grimacing?

The first annual Fishers Ren Faire turned out to be pretty decent, especially compared to what I was expecting. And from what I overheard about attendance, it's a pretty good bet we'll see another one next year. Hopefully they'll get the shuttle bus/remote parking thing worked out and it will attract some more vendors. Of course, the best thing is that it is about a mile from my house.

One cool thing happened that never happened to me before. I am used to getting my picture taken while in garb, and while in our way in, a couple asked my friend Nicole and I if we'd pose for a picture. After they snapped the shot, they offered to e-mail us a copy, which I thought was really cool.

So I may have spelled the headline wrong (come to think of it, may be it isn't such a bad thing... that way I don't have Google leading neo-nazis to my blog).

I read this story and had to post something about it. It involves the two great evils... WalMart and the Bush administration.

In a nutshell, a high school kid was doing a class project on the Bill of Rights. So a student tacked a pic of GW to a wall and snapped a picture while making a thumbs down next to Bush.

When WalMart processed the film, they called the cops, who in turn called the SS (Secret Service... not Storm Stueflwhatever.

Not what runes say!

Last weekend I went to the Ohio Ren Faire with several friends. The weather was perfect and we had a great time.

One of the shows there is the Mud Show. The performance we went to was "The Viking Story". It was the story of two vikings, Sven and Olaf. Olaf was potrayed by a member of the audience who got very into his role. Sven and Olaf had to compete in trials of manhood as determined by the toss of the runes to see who would have to battle the ogre Ivegar.

Every time it looked like Sven got a break, the wise-man would toss the runes and pronounce, "Not what runes say" followed by whatever the runes said Sven's newest misfortune.

For example, Olaf won the trials of manhood. Sven was happy because that meant Olaf got to go fight the ogre while he stayed home with the women.

The Sven pointed out that at least he had a year to train for the fight with Ivegard.

By the way, nothing parts a crowd of people in Ren Faire garb like a man covered in mud running from another man intent on flinging more mud at him.

Hmm. Maybe now I will go and actually do something productive.

Not what runes say!
Read the rest!

This editorial cartoon pissed me off enough to write this letter to the editor.