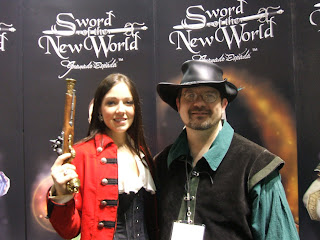 Saturday is about the costumes. Even though most of the folks do not enter the costume contest, Saturday is the most common day to dress up, and I am no exception. I donned my traditional (as in my tradition) Ren Faire outfit and headed downtown. I was running later than I liked, as I knew Saturday was also the busiest day of the Con. I knew I was in trouble when the gate was down and the "Full" sign lit at Circle Center. And of course my favorite garage was full as well. As I circled, I noticed a vehicle leave the same garage and I thought occurred to me.

They don't literally check to see if it's still full.

I drove around the Full sign, deciding it would be worth the $1.50 gamble to see if I could find a space in my favored garage. I was rewarded with a prime parking spot near the walkway entrance. If this was an omen for the day, it was good. 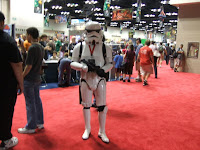 I headed for the Exhibition Hall (XH). I had no plans for games or seminars, just the Costume Contest (which meant arriving very early) and the Black & White Ball (which would require a wardrobe change). I ran into Mike on the way (or in the garage... I ran into him in the garage one of the days), who had also wore his Ren Faire outfit. Since we both got our doublets from Journeyman Leather and had matching hats, we had several pictures taken of us. 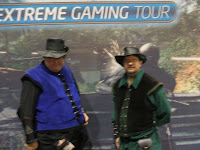 This one was by the photog for the Dell Extreme Gaming Tour. The sad part is that it is better than the pic taken with the photog's camera. You'd think someone being paid to take pics would be better (especially with their own camera), then again Dell's big retail outlet is Wal-Mart. Two names I don't associate with quality.

Note to self... the arm(s) behind the back pose doesn't do anything to de-emphasize the gut.

I spent the afternoon cruising the XH, taking pictures and finding a few things that I'd missed the last two days. I was also keeping an eye open for "Aria", because it had occurred to me that I should have given her contact info so that if nothing else she could get copies of the pictures.

The camera continued to serve as good excuse to talk to women. I also snapped some pics of painted minis and other cool stuff, like the Dwarven Dungeon tiles I wish I could justify.

I decided to head over and catch the showing of Call of Cthulhu, which conveniently took place in the same place as the Costume Contest. I figured watch the movie, have a seat for the CC, and read the final issue of Dragon in between. Unfortunately, the DVD player crapped out on them (shouldn't have used a Phillips), then they decided to kick us out and have us queue up for the CC. After spending 20 - 30 minutes in line (where I found out about the 4th Ed Ennies announcement), we were herded back in and seated. I figured if nothing else I'd be in the center section, close to the front, so I'd have a decent view. 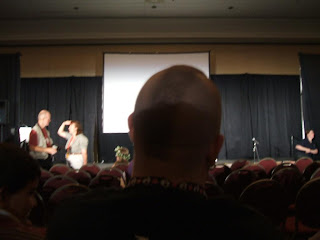 The Different Drummer dancers came out for the pre-show. I set my camera for sports mode and tried shooting around the melon in fromt on me. Not only was it problematic aiming by trying to hold the camera in the air, his noggin also threw off the autofocus at times. Oh yeah, and there's the whole part about a crap photog having a crap camera. So I didn't have much to show in the way of pics.

Note to GenCon: Get a bigger space for this event and a higher stage.

There was no flash photography during the CC, then again I figured that's what Google and Flickr are for. But I wish I'd taken a pic or two of the Emcee "Princess Leia" (no, not Slave Leia)... she was kinda hot.

At some point I realized that I had left my cell phone at home, so there was no easy rendezvous for dinner. Mike and I met up and tried the Ram, which was packed, and ended up making our way back to Champs. The wait was the same, but we could sit in the air-conditioned hotel across from the True Tavern and wait. Mike decided to opt out of the BWB, so we parted ways.

After changing, I stopped by the Auction Store and ran into some co-workers. One had seen me earlier, but now I was wearing a black dress shirt, black tie and black jeans.

"Weren't you a pirate an hour ago?" he asked.

"That was an hour ago, at GenCon you gotta keep up."

The B&W Ball was better than the Ruckus. I ran into a friend, who shortly left, and hung out with a developer from Everquest II, having a cool conversation regarding different conventions and the MMO market. He noted two things about GenCon... gamers were the most hardcore of con attendees he had seen, and also the friendliest.

I eventually got bored at the dance. I'm not the kind just to jump on the dance floor by myself, and by the time I'd decided I'd ask someone to dance during a slow song the DJ had stopped playing them (he p;ayed two the whole time I was there...). One kind of squirrelly looking guy had no lack of partners because he was *good* at dancing. Made me wish I'd taken some swing or ballroom lessons through the gym or something (a notion I've chewed on and never gotten around to following through on).

I decided to try crashing the White Wolf Party. I'd asked about the party earlier in the day when I won a t-shirt for Operation Swag and was told they were out of tickets. I figured worst case scenario they tell me no at the door. And unlike when we crashed it last year right before it ended, I knew where it would be.

I got in without a hitch. The bar was free... yes free booze. Alas, I knew I had to drive home, so I moderated myself. The club that the party was in is an "industrial" club and includes elevated cages on the dance floor. These were populated by booth babes, gamer girls, and a couple of ringers (at least I think so... I never saw them at the Con and they danced like strippers).

I ran into and talked to a few people such as Mikita and the couple Nicole and I crashed last year's party with. There was a fire-baton act, I saved some girl from walking into the men's room, free booze (did I mention free booze?), but no goth dodgeball this year. Finally last call was made and I decided to call it a night.

I love it when a plan comes together. :)