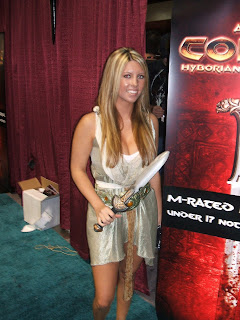 Before heading downtown, I decided to upload the pics from Wednesday and Thursday to both check them out and so that if I suffered a camera tragedy at least I wouldn't lose those pics. Then I saw how bad my shots were from the previous day.

It was time to break out the instruction manual. 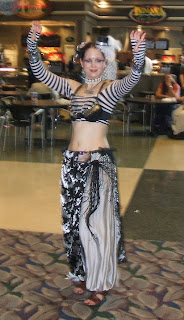 I had taken some shots the of one of the belly dancers from Different Drummers and this was the best of them (cropped). So part of my mission was to try to replace the shots I had messed up the day before. My second mission was to complete Operation Swag. My third was to get in some gaming.

I had decided to wear my costume from last year's Firefly LARP. That particular LARP didn't return this year, and I was too late to get in the other FF LARPs, but I was going to get some use out of the outfit dammit. I was just glad it wasn't 98 degrees outside like it'd been the previous week.

The first part and second part meant returning to the Exhibition Hall (XH). The first stop was Starwind Design's booth, where they gave my not only one of the embroidered canvas bags for the Stink but also an embroidered dice bag, the most generous of the donations I received for Operation Swag.

Pictures were still proving slightly problematic as I had to get used to aiming the camera, press the button and move it slightly to trigger auto-focus and auto-exposure, recenter it, and hope no one walked into the path.

I had picked out a couple of games to try to get into and found that to check availability. Unfortunately this meant going through the event registration line. And I did that only to find out they were full. So I picked one and decided to gamble with generics... as many problems as there had been with locations of the games, it seemed pretty good odds someone wouldn't make it. And often GMs would let an extra person or two slip in with generics.

The game had been moved twice and I was the first generic vulture. Unfortunately all of 8 of the players eventually showed (and the GM didn't want any extras) so I was out of luck. 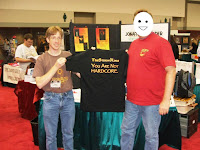 Back to the XH, as my friend TheStormKing was going to present one of his "You Are Not Hardcore" shirts to one of the devs from Lord of the Rings Online, and I was going to photo the event. To get the significance of the shirt, you'd have to be a regular on the LOTRO forums. I ended up getting a LOTRO shirt from him (and yes, I have a Hardcore shirt). 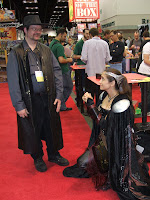 While there I spotted... I'll call her Aria (yes, I know her real name, I just don't know that she'd appreciate some strange guy posting it). I'd seen her over the past few years and the encounter is detailed in my mini-update. This is the other picture, reduced in size. Here's the thing that impressed me about Aria... when you take a picture of a booth babe, you expect them to be nice because that's what they are paid to do*, but Aria went out of her way to be nice to me, a total stranger that interrupted her to take a picture. Even though she won't remember me I was glad I got to meet her.

After the XH closed, Mike, TSK and I rendezvoused for dinner. My post dinner plans was the Friday Night Concert, though I had been weighing cutting out early to hit the Ennies. The first act, the Brobdingnagian Bards got a standing ovation for their sound check. They had been taking requests from the crowd, which mostly consisted of popular theme songs, when someone shouted out "Freebird!"

I never knew Freebird could be played so well on autoharp, mandolin and recorder. Too bad I put off my (would be) purchase from them until late Sunday... they left early. Tom Smith and Luke Ski were also both very entertaining.

No offense to the later acts, but I wish I had jetted after these three and hit the Ennies. They made the 4th Edition of Dungeons and Dragons announcement and evidently gave out copies of the 4th Ed character sheet on thumb drives. I'd love to compare what they are doing to my D&D mod rules under construction.

I did pick up a copies of Tom Smith's Last Hero On Earth before I called it a night and headed home.

* however, because they are being paid to be polite to you does *not* entitle you to be a jerk or a creep. Just remember, at a convention mace could be a big metal club.