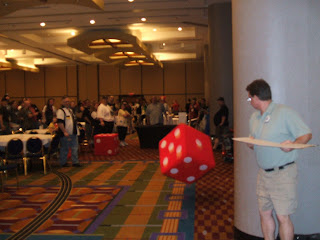 Day 0? Yes, that's how I referred to Wednesday, which kicked off GenCon for me. Early afternoon I arrived downtown to help in preparation for the Forum Stink put together by the Indy Mavens. The biggest task was packing the swag bags... lots of swag and lots of bags. 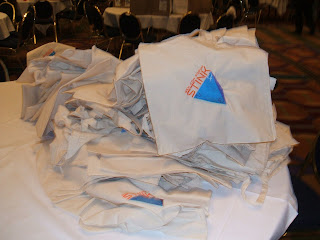 After the swag pack was finished, I swung over to the Convention Center to pick up my swag bag. There were already a lot of people there for early registration and folks were already populating the usual locations in the center (anywhere with seating that was open) to go through there swag bags. Since they marked your badge once you oicked up your swag, my notion of grabbing an extra bag for Nicole was shot down.

My assignment for the night was the raffle prize station. Since we pre-drew most of the winners and posted them at the station this meant folks had to come over to see if they won, which meant that I got to talk to a lot more people than if I had been sitting at a table somewhere among 500 people.

There was a cash bar, but it was only there until 8pm and I think that I had time for 2 beers. This would set the pattern for much of my GenCon spending... parking and cash bar. Expensive cash bars are a great way to reign in any notions of over indulging, because once I factor in my usual $1 per beer tip, it gets pricey quick.

After the Nordic Dice Toss wound down, I headed for home so that I could be up early for Thursday, Day 1.