Look who wants in... 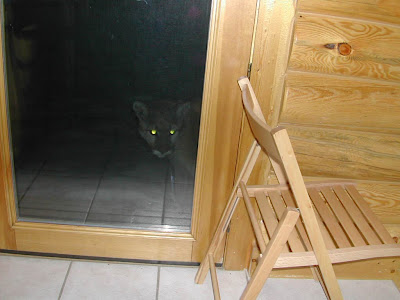 Can you imagine looking at your door and seeing *that*? I've seen a cougar up close before... while they aren't huge, they are large predators, large enough for me to prefer a solid barrier between us.

Okay, you want to hear the cougar story. Back in the 80's, when I was delivering pizzas while in college, I had a run to a local hotel. There was a moving truck a couple of spots down from the room I was delivering to, and I noticed a line went around the back of the truck and it was moving. I was expecting a dog to come around the the truck, but it was a mountain lion. It made that wierd squeaking cry they make while I muttered "good kitty kitty" and backed up until I was sure I was out of reach (fortunately I could reach the delivery destination).

A few runs later, I had another delivery to the same hotel to a room on the same side. This time I was ready, but the cougar was gone. A little disappointed, I went to the door. The customer opened the door and the cougar was on the bed in the hotel room!

At least I got a good tip.

When I delivered pizza, one house had a wolf on a heavy chain in the living room and some naked woman passed out on the couch. The guy at the door paid for the pizza and acted like it was a normal day at his house.