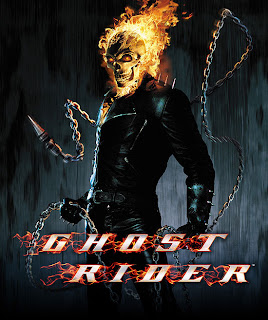 There's always an uneasy sense of dread whenever a new comic book movie comes out. While they don't have as bad of a track record as video game movies, movies based on comic books can often range from clunkers to down right awful, some so bad they never reach the screen.


One the plus side, I didn't go in with a lot of preconcieved notions about the story or the characters, which may be just as well. In the X-Men movies, for every nod to the fans there were also breaches in what the fans knew as continuity. For Ghost Rider, I knew the basics: he's some sort of supernatural avenger that hunts evil things, has a penance stare that makes evil-doers relive the pain they've inflicted on other, and he's a flaming skeleton riding a flaming motorcycle. That's about it.

The movie does a decent enough job giving you the back story, though through out the movie the dialogue is weak. Not Lucas-bad, it just seemed flat and stilted in places. Speaking of back story, the actor that played the teenaged Johnny Blaze looks nothing like Nicholas Cage other than having black hair.

Cage does as good of a job as can be expected with the script, but Mendes seems a little flat, but again that could just be the script. She, or rather her costumer, makes up for this by showing as much cleavage as possible without her just taking her blouse off. I wonder how many female journalists gritted their teeth every time she was on screen (she plays a reporter). Don't get me wrong, I enjoyed looking at her cleavage, but it seemed... unprofessional for her character.

There are also some plot holes... things I can't go into without spoiling. But the writers at places chose to sacrifice plot for the sake of a "cool" scene. You're best off not thinking too hard.

Speaking of cool scenes, one thing the did really well was the effects. This movie was practically begging for bad CGI (Ananaconda anyone?), but actually they were pretty awesome. You can tell some of them was done by the same people that did the Mummy movies. Whoever was responsible for the Ghost Rider character itself did an excellent job.

Will I buy this movie when it comes out on DVD? NO, at least not until it's in the cheap bin. But it is the kind of movie I'd watch if I came across it flipping through channels. The action is decent, effects are great, Cage is believeable, and Mendes still hasn't buttoned her blouse.