Movie review: Snakes on a Plane 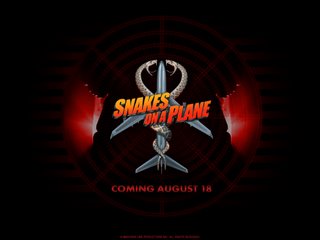 You would almost have to be a hermit to have missed all of the hype that has been building for Snakes on a Plane. I won't pretend to be much "in the know", I didn't really follow all of the activity preceding this movie. But once it came out, I decided that I wanted to see what all of the noise was about.

As other reviews will tell you, Snakes is a fairly formulaic movie. But while there aren't many surprises, there is a lot of suspense. I would not recommend this movie to people with weak hearts or to ophidiophobes. I would recommend it to anyone that likes a high suspense thriller. Odds are you won't be leaning back and chilling out, you'll be debating if you want to watch what the snake is about to do to that guy taking a leak.

I was surprised that the CGI wasn't better. It wasn't horrible, but there were a lot of scenes where I thought "yup, CGI". Maybe we've gotten spoiled after years of the Matrix and Star Wars.

I bet this would be a good movie to take a date to, though you'll probably lose feeling in whichever arm she has a deathgrip on once the snakes are loose.

This would probably be a bad in-flight movie. :)