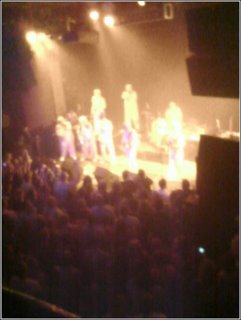 Ken gave me a heads up that Here Comes The Mummies were playing last night at the Vogue. Even though it was kind of late, I missed them last time and got to hear everyone's stories about how much fun they were. I resolved that I could lose a little sleep for a lot of fun. 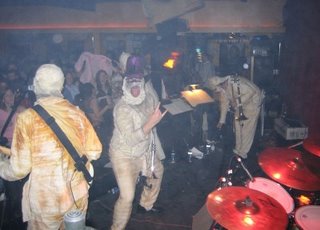 I just didn't know how much. Doors were slated to open at 8pm, so I got there at 5 til, figuring if I got there early I'd have an easier time finding Ken and the others. But there was a sign on the door... the tour bus had broken down, doors wouldn't open until 8:30, the Mummies wouldn't take the stage until 11.

In for a pence, in for a pound.

I figured CT Pepper's front patio would make the perfect place to chill for half an hour, have a beer, keep an eye out for anyone I know and watch the Broad Ripple scenery. Some creepy guy was trying to sell perfume to people waiting as a line began to form. Jason was the first person that I knew to show, and joined me on the patio while we waited. And waited. Finally, the line started crawling. Around 9:30ish, the line had decreased to the point that we decided to enter. Creepy guy hadn't made a single sale.

Once inside, I learned that Ken's girlfriend had secured a table on the balcony, and it turned out to be at the front of one of the balcony wings (in other words, probably the best seats in the house). The opening act, Autovaughn, got on and off the stage ahead of the adjusted schedule. They were a decent band, but I'm no modern music critic. If nothing else, they made a good soundtrack to watch the scenery.

About 10:45, the fog machines fired up, the drumming and moaning started (think 1930's monster movie) and the Mummies lurched to the stage. The Mummies aren't just a band playing songs, they are an act there to entertain the crowd. And entertain they did. It was hard to stay seated (but one of my pet peeves are people that stand in front of me and block my view, so I try to be considerate) as most of the crowd was on its feet.

I don't know how to classify the music, other than "funk" with a mummy theme. They had a 5 piece horn section that night and put it to good use. The time slipped by, and I regretted having to leave before they finished, but when I realized it was after 12:30am, I couldn't keep telling myself "just one more song". As it was, I was a little like the walking dead this morning.

Hopefully next time they're in town I'll be able to stay the duration.

Reading your post really makes me wish I'd gone. We skipped out because we thought I'd be too late of a night. Seeing that it started late does give me some relief about skipping. I've never been to The Vogue; the tight feeling of The Patio was kinda nice, but I guess that is no longer an option. I was hoping that their next show would be on a Friday or Saturday, but looks like it is the Thursday 5-days before Halloween. I'll probably sleep through this show as well. . .