I've already talked about gaming and the Exhibit Hall, but there's a lot more to the GenCon experience, and even more that I didn't partake of this year.

Attending the Costume Contest is a tradition of mine. Saturday days my friends usually split up to go do their own thing, and my thing is watching the contest. This means getting in line up to 2 hours early. I hope the Indianapolis Convention Center expansion will mean a bigger venue for the contest, hopefully one with a higher stage or tiered seating.


An important part of the Costume Contest for me is the entertainment, namely the Different Drummers Belly Dancers pre-show and Luke Ski's intermission performance. Unfortunately the contest ran long this year, so I had to take off before they got to the winners. 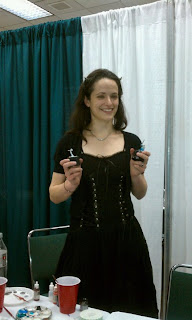 KNH and I took our traditional mini painting workshop, this year with the talented Marike Reimer. Every year we learn something new, and this year was no exception, though looking at Marike's minis made me feel like a neanderthal with a mastodon tail dipped in tar. 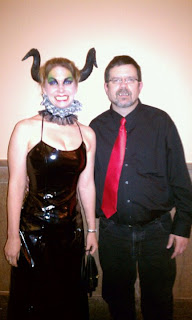 Saturday night is usually the double feature of the GenCon Dance and the White Wolf Party. KNH's costume was a huge hit. I ended up popping my fangs after an hour of fiddling with a loose one (try talking while holding in a fake tooth with your tongue). Fortunately WW went back to the original venue, as opposed to last year's oven of a venue ironically named The Ice Lounge.

Dining was 3 nights at Scotty's Brewhouse and 1 night at the Ram. I was advocating Scotty's a lot because IndyDav (the manager) is a gamer and went to lengths to make GenCon welcome, bringing over many traditions he had started at the Ram. That and their GenCon beer was a Scottish ale. The 501st Stormtrooper Legion was there, dice was given away, sci-fi/fantasy movies were playing, and there was lots of atmosphere. Unfortunately, I think the staff was overwhelmed. Two of three nights my order was wrong, two of three nights I didn't get my dice, beer service was slow, and the night they had a live "geek" act, the group was so loud you couldn't hear. Add to that the longish walk, it may be a hard sell for next year. 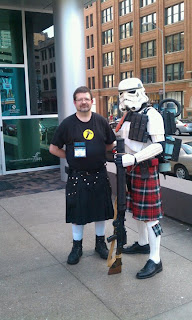 The Ram seemed to just phone it in. They had t-shirts and some signage, but I noticed the movies were gone. They know they will be at capacity without trying, so they don't really have to try.

I have yet to go to a convention. I never really considered it until a couple of years ago, and now I think I'll go to one before the end of the year.