What is GenCon without gaming? An expensive shopping trip with costumes. Fortunately I was able to get in some gaming this year, largely thanks to friends who signed me up while I was stuck working in the field. 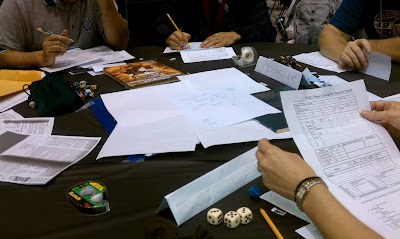 Thursday was an Old School 2nd Edition D&D game where we played the minions of Sauron invading a dwarven hold in the Greenwood (which became Mirkwood). There were some great nostalgic moments as well as reminders of things we're better off without in modern gaming. In the first encounter we lost a party member to a failed save versus poison. Towards the climax of the session there was a demon (actually an ice devil) summoned, and the DM asked who wanted to play it. My friends looked at me because I put the ham in Hamlet. One of the joys of playing con games is that you can go over the top and try things you'd never do in an ongoing campaign. 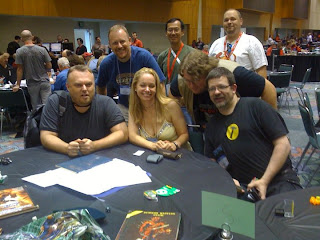 Friday was Wild West Cthulhu, ran by friends of mine, Tim and Pat of Gamerz. I had encouraged several friends to play and was tickled to find out that I would get to play the leader of a Wild West gang that were also werewolves. It looked like the theme thus far, to quote Jayne was "let's be bad guys." 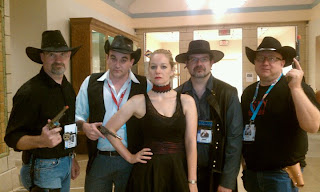 Needless to say, it was a hoot. My gang were among the few survivors, having immediately set up camp in the silver mine to keep anyone from making silver bullets, and delivered the best death the GM had seen in a long time. We suspected another character of being treasonous, pulled guns on him, and I said "either you're in cahoots with the other side or you're an idiot."
His answer was, "I'm not an idiot," which was immediately followed by my "bang!." Tim was so amused he had us re-enact the scene at recap.

My last game was a Courting Murder LARP. The world reminded me of the Dresen Files set in the 30's, and I am a sucker for any vintage atmosphere stuff. Last year several players had dressed up for the part, so I donned a shirt and tie to reprise my role of Charlie MacGregor, the "accountant". Sadly, almost no one else dressed for the part, several regulars from previous years didn't make it, and not only didn't anyone play my allies, no one played my rivals. This was the last year for this LARP, so Charlie's story ended with a fizzle.

I tried to avoid my default quasi-gaelic brogue that all of my accents seem to devolve into, but instead of sounding Canadian Charlie ended up sounding more like a New Yorker that said "aboot" and "eh?"