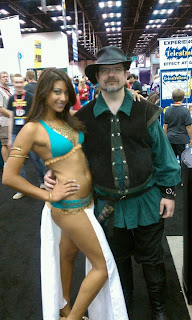 In years past I broke down my GenCon recaps day by day. Thanks to Twitter, Facebook and my EVO is was able to comment live this year. So instead of going day by day I'll just write about the Con by subject.

The XHall is (to me) the heart of the Con. When it closes, that marks the end of GenCon. I spend many a hour here and this year was no exception. In addition to all of the cool stuff it is the best place for people, both of the watching variety and those people you bump into once a year in a crowd of 30,000.

One of the great things is the passion that exhibitors have for their wares. I don't mean in just selling goods, in many cases what the exhibitors are showing you is their creative baby, whether it's an artist, a games designer, a film maker or a performer. People don't vend at GenCon, or even get into the various business aspects of our game-geekdom to get rich. They do it because they love it, and that shows when you talk to them. 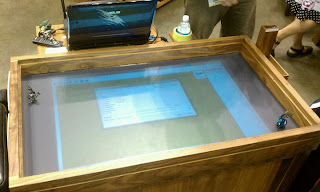 The coolest product I saw was the new Hoplite table prototype at Geek Chic with a touch-sensitive computer screen in the bottom of the table. Actual production was at least 6 months away. I think the most dangerous thing about the (non-computerized) Hoplite was that I looked at it and thought "that's the same size as my coffee table... and I could afford it." 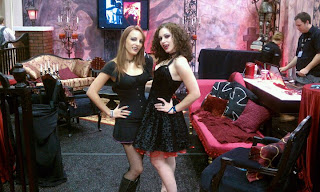 The White Wolf booth had no games this year. It was all about advertising their upcoming convention in New Orleans, made to look like a New Orleans bar complete with booze(!). Of course they had the prerequisite fanged booth babes. Some game-bloggers have dissed them for this, but they paid for the space and really for the companies, GenCon is more about exposure and advertising than actually moving product. If they move enough the pay for coming, that's good. I guess WW and CCP (the company that puts out Eve Online) decided to dispense with dealing with shipping, merching, selling and return shipping books. One of the rumblings I've heard is that the New Orleans event will also be where they announce the World of Darkness MMO. But that's rumor.

The art show was about the same size as usual. While I wanted to buy some art I promised myself I wouldn't buy anymore until I put up the pieces I've already acquired and are accumulating dust. Also the Authors' Row was adjacent, so I stopped over there daily to say hello to Jonathan Rudder and his brother. Jonathan also happens to be a developer with Turbine's Lord of the Rings Online and probably knows more about LotR than anyone living.

I think this was the first year I didn't visit the Wizards of the Coast booth. I think the lack of compelling releases, the demise of the Star Wars line, and burn-out on the 4e drama left me with a healthy disinterest. It never seemed really busy and I have to wonder how bad the fallout from 4e and Essentials has discouraged their customer base.

I had an opportunity to talk to author Michael Stackpole while he was manning the Origins Game Fair booth. I've attended several of his seminars over the years and have read several of his books. What I didn't know about was his involvement in Origins and gaming. I had written off Origins, but after talking to him I may give it another try. 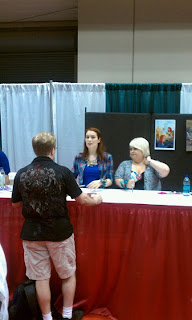 A huge difference this year was the return of the Media Guests. A as opposed to Actor-Who-Played-Bit-Character, GenCon lined up some truly geek-worthy guests this year, namely Felicia Day of the Guild (as well as Sandeep Parikh, Jeff Lewis, and Robin Thorsen) and Wil Wheaton.. I found it amusing that an article about GenCon noted that he played "Evil Wil Wheaton" on Big Bang Theory and didn't mention Wesley Crusher. I thought about going through the line just to meet Felicia but it would have been "Hi I'm Fan #5256 you've talked to today and I love your hair... I mean the air." Then she would have sprayed me with mace.

Speaking of Big Bang Theory, the big thing in t-shirts this year was Sheldon shirts. The funniest was for the ladies and simply said "Stop staring at my bazingas".

Another difference was the lack of computer game companies. The past few years a corner of the XHall was darkened so companies could demo their upcoming games. This year, nada. I expected Turbine to be there with Dungeons and Dragons Online and soon to release Free-to-Play Lord of the Rings Online, and SOE with DC Universe Online, but nada.