Saturday is the biggest day on Gen Con. It is also the day of the costume contest. For some of my friends and I, it is our traditional LARP day. And our traditional after-LARP lets-go-out-for-drinks day. It is the only night of Gen Con I bother to get a hotel room. Hotel room - $200, not having to worry about getting a DUI – priceless.

Given the expectations for the crowd, I got downtown even earlier so I could score a space under my hotel. This also meant that I was way too early to check in, so I had to sort out the final touches on my costume at my car then set off for the ICC dressed as a Steampunk Texas Ranger.

I was thankful for the mild summer we’d been having since at places I was wearing three layers including a hefty amount of leather. I had no real agenda other than the LARP that evening. I mentally figured I’d try to squeeze in watching the costume parade around checking into my room. I strode towards the dealer hall.

It should be no surprise I ended up at the X Hall. On Saturday, the area in front of the X hall and inside are the best places to see people in costume. I watched my phone for texts from friends to meet up and started wandering.

Despite the sea of humanity, or maybe because of it, I kept running into people I knew. Despite having spent hours and hours in the X Hall, I was still finding new things. I also stopped at a couple of booths that had donated to the Stink to thank my contacts and inquire about whether they had gotten any traffic.

Just before 3:00 folks started lining up for the costume parade. I decided to hurry over to the Marriott, check in, and try to get back in time for the parade. Luckily my room was ready, I took my bags up and headed back to the ICC. Just in time to see the crowds dissolving from the end of the parade. Guess I’ll have to watch it on the internet.

With a 6:00 LARP, another early dinner seemed in order. One of my friends twisted my arm to go back to the Kilt (okay, he suggested it). The crowd was a lot noisier than Thursday. The music was turned up loud enough to make it hard to carry on a conversation and there was a raucous group in one of the side rooms. Again, service was okay, but they were crowded as the MotoGP crowd was turning up in force.

I met with Nicole to head to the LARP. No surprise, she was having her picture taken when I arrived. Then my theory that the more cosplayers you get together, the more people will want to take their picture seemed to be validated. Go a bit, get your picture taken. Wait as a couple more people grab pictures. Of course, if I didn’t like it, I wouldn’t dress in costume. It’s just one of those things you have to build into your logistics. 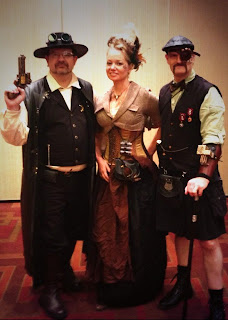 We made it to our LARP, Brass and Steel by Pamean Games. We had played in the LARP ran by the same group last year and eagerly looked forward to this year’s event. The GMs had worked with people in advance on character selection and providing some background but were still able to accommodate walk-ins (including two cosplayers I had told about the LARP outside the X Hall and had convinced to give LARPing a try).

It was pretty much a perfect storm of setting, Game Masters and players. I spent the evening affecting a Texas drawl that didn’t devolve into a quasi-Gaelic brogue (as my character accents are want to do) and trying to juggle in-game crises as my character was put in charge of security. Nicole literally had a line of people waiting to talk to her character. All of the players seemed really engaged, to the point that I thought one was a ringer put in place by the GMs (he had a pivotal role in the events).

Afterwards the GMs invited people to join them at the RAM, another Gen Con mainstay. We got there before everyone else, put in for a table, and found out it would be at least 45 minutes to get seated. While some may look at that as just a long wait, we looked at it as an opportunity to go to the nearby beer garden.

Sadly, by then the beer garden was gone. So we went to the House Bar (under Union Station), got a drink, checked out the Dance with the Dead, and then headed back. Unfortunately, our group had swollen well beyond our original estimate. We ended up being split between tables when finally seated and the table I was at was lost in the shuffle. A couple of beers later, it was 2 in the morning, Meridian was crowded with bikers, my friends had already called it a night, so I had an early Saturday.