Gen Con Saturday is the biggest day. I opted for a hotel room again this year, as then I didn't have to worry if the festivities went on late or if I had a few beers. Plus it made a mid-day costume change so much easier. The plan for the first part of the day was to meet up with Nicole, her friend Amy, her daughter and nephew to go around in Star Wars costumes. Nicole's daughter had chosen a Star Wars theme, so I had hastily assembled a Obi-Wanish costume. 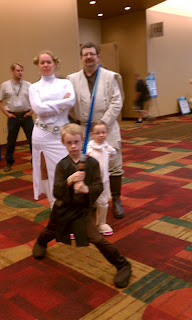 (this pic was snapped before Amy joined us in her X-Wing pilot costume) We learned the more cosplayers you put together in a similar theme, the more picture requests. When I was by myself, I was asked maybe twice for a picture... Jedi are a dime a dozen. Later on Amy and I were in the X Hall and we had our pictures taken a few times. When I found Nicole and the kids, they were already posing. When you put the bunch of us together, we'd get a request every couple of minutes and once we stopped and posed, more people would pop up with cameras. The kids loved it and everyone polite. That afternoon, we had our True Dungeon run. For Nicole, Weasel and I, it was our first time. As such, we were unprepared for the hurried nature of mustering our party of ten, nor of the fact that clues were salted in the mustering area. We proceeded through the dungeon with mixed results. Like a tabletop game, you had people whining for healing right away, which was risky to our resources since every time we failed a puzzle we took damage. There was a lot of noise which made audio clues hard to discern. There was a GM in each room and they ranged from really good to bad. Given the price of $38 a head (plus more if you bought tokens - I didn't), I was underwhelmed. After a late lunch/early dinner, I checked into my hotel and changed costumes for our Brass & Steel Steampunk LARP. Jason and I had coordinated on choosing our characters, making things easier. He also brought a sword cane walking stick that fit in with my character quite nicely. Plus half the fun of Steampunk is the costuming.

(actual pic fro @knharter - it turned out much better than mine) The LARP was a real good time, we all plan to play it again next year. I'm looking forward to the pictures from it (they had a photographer going around taking pictures as well as taking us out to pose for individual pictures). Not only was the game well organized but the players were great and the game masters were sincerely interested in feedback. After the LARP we went over to Union Station to check out the Masquerade and have a couple of drinks before going in search of watering holes. The lines were horrible. Even at the House bar downstairs (more and more folks are discovering it). Plus the bar upstairs took cash only. Someone tell them that it's the 21st century. With the MotoGP in town and downtown Indy clogged with bikers (a big fail on whoever in Indy thought that was a good idea), I was pretty dubious as to whether we'd have any luck at clubs we had hit previous years. We happened across enough seats at bar in the Ram and ended finishing the night there.