Parking can often be a bit dicey during Gen Con. I had timed my arrival to coincide with the opening of the Exhibit Hall so that by the time I got parked and walked over there, the crowd would be dispersed.

In the past I’d always been able to enter a “full” garage and find a spot. Evidently a lot of other people have learned this trick. It took 45 minutes to find a spot, and even then I think it was because it was a cramped space hidden in a corner obscure by some construction.

Once I got to the Exhibit Hall, it was Christmas time. A very crowded Christmas. I’m sure everyone has a plan on how to attack the Exhibit Hall, mine is pretty straight forward, start in aisle 100 and work your way across going up each aisle. Evidently whoever planned the layout of the Exhibit Hall thought that was a terrible idea.

Large “booths” broke up the flow of traffic, forcing you to double back to an aisle you had been down or skip ahead to circle around the large exhibit. I don’t know if the intent was to try to disperse the flow of people, but I found it rather annoying as did others I talked to.

On Gen Con X Hall tradition for me is to buy some new dice. My friend Nicole swears my touch jinxes dice. This has led to another tradition – though she seems to be the only one affected by my so-called jinx. 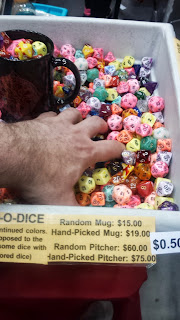 A good chunk of the first day was spent in the X Hall, hanging out with one friend after another, checking out what was new. The only thing I was intent on picking up was the copy of the Firefly Game Preview I had pre-ordered, and I was keeping an eye out for anything that might go with my Steampunk Texas Ranger costume for Saturday,

We (my friends Weasel, Mike and I) decided on any early dinner at the Tilted Kilt. A piece of advice - never plan on eating right after the Exhibit Hall closes if you don’t want to wait an hour for a table. Since it was early, we were seated right away. I was looking forward to some boneless wings and garlic fries to go with this year’s Gen Con beer.

It turned out that since both Gen Con and MotoGP were in town, the Kilt was running with a very limited menu. While as a customer I was disappointed, having worked in the restaurant business I could understand the logistics behind the decision. The beer was so-so, not nearly as good as the previous year’s Ale of Destiny. The service was okay, not great, but okay.

We headed back to the ICC environs. Weasel and I had an RPG scheduled, a chance to be D&D Vikings which meant dice to throw and scenery to chew. We arrived at our table 5 minutes early, the first ones there. At five minutes after, only one other player had arrived, and no GM. I checked with the event desk, our event hadn’t been cancelled. At 30 minutes after and no GM, we bailed and got refunds for our tickets.

Since our evening was now open, we decided to try to D&D Experience. Weasel and I had played in a D&D Next event in Fort Wayne a year and a half ago, and while I had been downloading the playtest packets since we hadn’t actually played the game. We got in a growing line just before 8 o’clock, I figured our timing was good. I turned out the line was for the 9 o’clock event, so we had to stand there for over 45 minutes before getting taken to pick out our characters then seated at a table. Then they had to find a GM as they were shorthanded.

When our GM arrived, he informed us that he had never run this adventure. Our party consisted of 2 paladins, 2 druids, 1 cleric and my monk. I guessed we’d get a chance to see how reliant the new system was on having a “balanced” party.

It turned out, not very. The GM was quick on his feet and probably loose with the rules, but we were having fun bashing goblins, ogres, skeletons and such. During the course of the evening we had seen a staff member taking a miniature of a dragon to each table. It turned out each table represented a different tower in a besieged fortress and the dragon was going tower to tower. As the mini neared our table, the GM asked how mean we wanted him to be.

“Give us a heroic death”, I answered.

Turns out being feared by the dragon and running away wasn’t very heroic as my dice decided to balance out all of those high numbers I had been rolling by tanking my fear save. Somehow our party survived the dragon until the timer ran out and it moved to the next table. We finished up with a couple of ogres and called it night.