The first thing I noticed when I got to the ICC (Indianapolis Convention Center) was the number of people. Activity on Wednesday has been increasing year after year. Whereas the Stink used to be the only thing officially going on besides the will call line, now there are actually some events. This year featured a party for the tapping of the official Gen Con beer which included a concert out on Georgia Street.

Within 30 minutes I had run into four people I know, all gamers from earlier epochs of my life. This is always an ongoing occurrence for me at Gen Con, running into people I know but almost never see anymore, many only at Gen Con.

But I wasn’t at the ICC to bump into people, I was on a mission. I was in charge of collecting swag for the Stink as well as my usual duty of getting the Nordic Distance Dice from Gen Con and transporting them to Union Station. I ran into a wrinkle when I couldn’t get a hold of any of my contacts among the donors except the one that had not arrived yet. Fortunately I knew an exhibitor who was able to get me in so I could make the rounds.

Going into the Exhibitor Hall on Wednesday is kind of like being a kid and finding the closet where your parents hid the Christmas presents. Sure, everything isn’t wrapped up yet, but seeing what you have to look forward to gets you even more excited. But again, I was on a mission and didn’t have time to sight see. I collected the assorted swag from our gracious donors, a mental clock ticking in my brain.

Part two of my mission was to get swag and the ND dice from Gen Con itself. Each year Gen Con gives us boxes of t-shirts to give away at the Stink. On top of boxes of shirts I balanced the two huge dice (each one is about 2’ across each face) on my hand truck, then set out from by the will call line all the way to Union Station.

Last year was the first year for the food trucks on Georgia Street. As I’m rolling my hand truck I notice the police are setting up a line of traffic cones on Capitol, then the food trucks start filing in one after another. It looked like a parade, the line of trucks stretching for two blocks.

At Union Station my fellow Mavens had been at work decorating and setting up. There were already people gathered outside the entrance 45 minutes early. I was a little concerned about attendance because not only had Gen Con left us out of the event book (usually we get a blurb in addition to our event listing) but the party and concert was scheduled and the weather was beautiful. Even though our event had sold out all 400 tickets, they were free tickets. 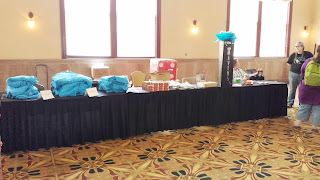 We opened the door and began the annual task of line herding. The trick isn’t to get people to line up, the trick is to keep the lines from running together as attendees got to the end of the swag line, saw a game table and got in line for it. That line quickly backed up to the swag line, and since people saw a line their instinct was to stay in line. In the end, we tallied somewhere over 350 attendees.

I got to say hi to my Irish Gen Con/Facebook friend and found out that new phone’s camera was extremely sensitive to movement (there’s an anti-vibration icon that does nothing but taunt me), so my pictures for Gen Con are pretty spotty. 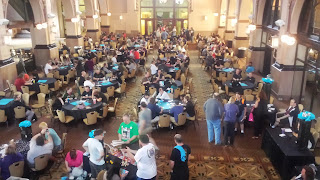 At the end of the Stink, I loaded the dice on my hand truck, a bit easier when they aren’t perched on top of a pile of boxes, and reversed my path back to the front of the ICC. Needless to say, giant dice draw attention from gamers, so I stopped a few times for photos.

A Wednesday tradition is that a friend of mine hosts a get together. She usually has house guests for Gen Con that include not only gamers but game designers, so it is a great time to hang out, talk games, drink a few home brews and try new games. The perfect way to finish up Gen Con Day 0.