After the parking debacle on Thursday, I got an earlier start on Friday. This time I was able to get a spot in the Pan Am Plaza garage, right across from the ICC, close to Georgia St. I had a little time to kill before my afternoon game, so I headed to the Exhibit Hall. Yes, I spend a lot of time in the X Hall during Gen Con.

One thing I try to avoid in the X Hall is the bathrooms. They are the nastiest in the ICC complex. But sometimes you have to make a pit stop, and I figured that since the X Hall just opened, the cleaning crew would have cleaned and stocked the bathrooms overnight. Wrong. One of my standing Gen Con tips is use the restrooms in the hotels if possible.

With the aid of technology, I helped a friend do a little remote shopping while I navigated the healthy crowd. The crowd was what I would consider a Saturday crowd, complete with huge backpacks-of-doom and pull-carts-of-tripping-hazards.

Our afternoon game was Bar Room Blitz, a Pathfinder battle royale that stuck 16 characters in a tavern with secret agendas to accomplish in four hours. I regret passing on the chef character once I realized I could have spent four hours playing a psychotic Swedish Chef. Here ve have der magic wand… oop de oop… fireball! 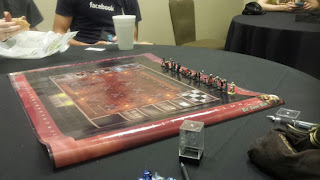 I ended up running a chaotic neutral halfing rogue on a secret courier mission with no idea what my contact looked like. For those of you who don’t play D&D, chaotic neutral = sociopath. Why my character would have been entrusted with anything I don’t know. Since all of my fellow tavern patrons seemed to be just as bad (seriously, the first fire was started in the second round of play), I threw accomplishing my mission out the window, went outside the burning tavern and barred the door. Why did the tavern have bars on the outside of the door? Obviously to lock those lunatics in a burning building.

Having worked up an appetite playing a lunatic, an early dinner seemed to be appropriate, especially with the increasing crowd downtown between MotoGP and Gen Con. This time we opted for a Gen Con staple, Scottie’s. Sure, it’s a farther walk, but Scottie’s is probably the most pro-Gen Con establishment. Due to our timing we were seated right away.

Scottie’s may have been running on a limited menu, to be honest I’m not sure if the themed menu was our only option because what I wanted was on it. I also decided to try the Paizo Dog-slicer Ale. We placed our order and sat back to wait on our drink. I waited… and waited. The waitress stopped by a couple of time to assure me she hadn’t forgotten, that the beer should be right out. It felt like half an hour (which means it was 15 minutes), it turned out they had to change the keg.

I wish I could say the beer was worth the wait. It tasted like a cross between an IPA and a wheat beer, and I’m not an IPA fan. I choked it down and ordered a Wee Mac when my food arrived. That beer only took 10 minutes… again I had ordered at the end of a keg.

I headed back to the ICC to look for something to do. I was outside texting when I saw two men walking towards me. I could tell by their attire they were a couple of the evangelicals that seem to show up every Gen Con and lurk outside trying to save us wicked gamers from Satan. I had drink just enough beer to loosen my introvert tendencies but not enough to dull my wits.

I’m pretty sure they are used to one of two reactions. Blow them off or get defensive. They opened the conversation politely, asking about what I liked to do at Gen Con and what kinds of games I played. Of course, I included D&D in my response. “I used to play D&D for a few years,” one of them said. “It started to consume my life and…” “But you’re here to talk to me about faith, right?” Sure, interrupting was a little rude, but I knew where he was going and I decided to defuse that bomb. “Gaming is just a hobby. And I think you’d agree there is a huge difference between faith and a hobby.”

Twenty minutes later they walked away after we agreed they could pray to their god for me and I would pray to my gods for them. I prayed that our conversation would give them something to think about and that they could learn something from the two Christian gaming groups that were in the exhibit hall and realize people didn’t need to be saved from gaming. I didn’t see Gary and Randy the rest of the convention.

After perusing the event guide, I decided to head to the beer garden for a while. Of course, I ran into people I knew outside and in the garden, hung out talking to people for a couple of hours before deciding to call it an early night so I could rest up for Saturday.