First I suppose I should explain what Microlite 20 is. It's pre-4 D&D distilled down to its basic essence. Its beauty is in its simplicity and just reading the system makes me yearn for the "old days" of D&D.

Of course, what happens when I read a game system? My brain starts thinking of ways to muck around with it.


Oz, have you ever ran a game you didn't tamper with? - actual player quote.

If it's so simplistically perfect, why mess with it? Because I need some meat with my potatoes. The Expert addition actually takes a big step in the right direction. But I've gotten attached to the granularity I've gained with my a la carte rules-mods for 4e and Star Wars. The questions running through my mind -

Can I mod the rules to capture the flexibility and flavor of my current game?
Can I do so without creating something so complex that I might as well have stuck with what I have?
Can I balance it? (The biggest challenge of a la carte)
Can I use it easily with existing source materials?
Can I actually finish it before another shiny object distracts me?

Why couldn't I have stumbled across this before my vacation?

I thought that this was a done deal a while ago, but it was in the news today.

When I see projects like this, it makes me wish I had taken a little more time house shopping and gotten something with space I could work with like that.

Eat The Cheerleader, Save The Game?

Get your mind out of the gutter. Check the video after the jump.

I can has Star Trek (Online)

I've been sucked into another MMO, Star Trek Online. Initially I didn't think I'd play long but it turned out that the technical issues were much easier to solve than the ones that have kept me from playing LOTRO.

Unlike LOTRO, I haven't opted for the lifetime membership yet. There were enough issues at launch to cause me doubts, and while I never regretted the lifetime sub for LOTRO, it is a big chunk of change to plop down on a game you're not sure you'll stick with.


In some ways it doesn't feel like an MMO. I think it's a combination of the omni-server/instance system and the fact that we spend a lot of time in our ships. In most MMOs you have distinct servers and you tend to start recognizing names. In STO, there are no servers, just instances of the same space used to keep it from getting crowded, so you don't end up running around with the same people day after day.

The story line of the "main" campaign, the episodes, are great, with plenty of callbacks to various Trek series. And there are plenty of character and ship customizations to keep pixel-crack junkies happy for a while.

Having two systems to learn, ground and space, isn't a daunting as it may appear up front, as both are pretty easy to learn. Fortunately the designers didn't succumb to the twitch mentality used in FPS games and the Star Wars Galaxies NGE for the ground. Space is somewhat simplified with limited 3D, so you don't have ventral and dorsal arcs and you can't roll your ship. I consider it an acceptable compromise, especially considering the source material.

There are some weak points to the game, besides a lack of community. The crafting system blows and some of the other systems are clunky. These may be improved, back again to not having the lifetime membership yet.

In the funniest bug I've ever seen in an MMO, there is (or was) an issue in visiting bridges. Your ship has a bridge where you can walk around, with your bridge officers hard at work at their stations. You can also invite your friends to hang out on your bridge, because it's cooler than hanging out in your mom's basement. Well, when I went on my Klingon faction character's bridge, all the crew were Starfleet. I chuckled and told a friend who was online about it. On an impulse, I decided to see if I could invite his Starfleet character to visit my Klingon bridge.

It worked. And then all of my Starfleet crew whipped out Klingon weapons and jumped him. I was laughing so hard I almost didn't kick him out before he died.

I Can Has Star Trek? 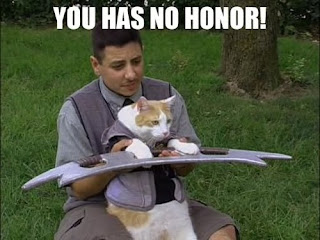 Check out more Star Trek LOLCats on Io9. Pic #5 is full of win for us old-timers.

My quasi-obsession with Felicia Day continues... I stumbled across the IGN video after the jump and pasted it here before I even watched it (partly because IGN videos bog down on my system from their sight). Cute gamer geek red-head *and* lightsaber fights? That's a no-brainer. Except with lots of brains, because geeks are smart. Especially those that make their own lightsaber videos. Double especially those that can get Felicia Day to be in their videos... that's like Dr. Horrible geniusness.

Yes, it's exactly what it sounds like. Girls dressed up as iconic hot scifi babes* and stripping as much as possible without actually getting naked. In a word...

If they took this show to GenCon they would make a fortune. And probably cause a riot.

Here's the article on Io9. The video is also after the jump and is borderline NSFW depending on how your work views pasties.

* Sookie Stackhouse? Really? Instead of Princess Leia and/or the Orion Green Girl?