Yay! The new season has begun, with a slew of new shows and a couple of returning favorites.

Heroes goes into the second season with all sorts of interesting potential. I'll avoid any spoilers, but although less has changed than one might have imagined, the new developments are interesting. And I love the scene where HRG has to deal with his prick of a manager. A lot of us have had a boss like that at one point or another and would have loved to have done the same thing.

Smallville started season seven with what felt more like the gasps of a dying show. I am not pleased with this Supergirl crap and her prominent featuring in the opening titles makes me wonder if they are trying to transition the show from being about Clark to being about her. And LOis Lane has to be the most clueless person on the planet... at least Lex has the excuse of insanity.

Chuck. Brilliant! At least one of the writers works in electronics retail. Co-workers that have watched the show have all seen people they "recognize". While the premise seems shaky, everything else makes up for it. And for the win, picture Jayne (from Firefly) having to work undercover at Best Buy... and he can't kill anyone.

Journeyman. Some critics have panned it. I liked it and it is on my viewing list. Then again, I dig good time travel stories, and critics that grouse about it being "confusing" are too used to reality tv and comedies that pander to the lowest common denominator. I liked the protagonist (Kevin McKidd - Lucius Vorena from Rome) and feel sorry for his character... this time travel stuff isn't fun and games and is messing up his life, and Moon Bloodgood is teh hawt.

Bionic Woman. Not overly impressed with this show. I'll give it another episode or two and see how it goes. One of the things that I don't like is that they went off the deep end with the uber-tech... instead of having true bionic limbs, they use nanites (under a different name) to explain the bionics and give her a healing factor. And Katee Sackoff (Starbuck from Battlestar Galactica) has been typecast as a crazy cybernetic badass bitch... as the rogue original bionic woman here, and as Starbuck, who pretty much has to be a Cylon.

The rest of the episode can be found here until YouTube takes it down.

That's what I was told this week. A bunch of stores in my district took inventory under the new system (which limits the kind of research a store can do after the fact) and most of them went poorly for one reason or another. Once again I was called on put on my white hat and jump on my white horse.


Mind you, I had already been running around the prior week. While I was on lunch about two weeks ago, my boss came into the break room and asked when I would be back from lunch.

"Fifteen minutes," I replied. "Why, what's up?"
"The supervisor at Store HHB has gone awol. They called the GM (who was on leave of absence at the time) to see about getting you over there as soon as possible."

The supervisor they were speaking of hold's the same position that I do, and HHB was 5 days out from inventory.

"When do I go over there?" I was figuring the following day.
"As soon as you get back from lunch."

This last Tuesday was when the preliminary results from all of those inventories posted. I had a trainee working with me who asked how many calls a day I get because my cell phone kept ringing. Then the General Manager from HHB called. The results were bad and the manager in charge of inventory hadn't slept in two days. If at all possible he needed me to come over there. I told him what reports to print off and that I would come over in the afternoon. Then the Field Support Manager called. They needed me there ASAP.

As soon as my boss got in the door I was back on my horse. Fortunately I have a strong team that steps up when I get yoinked out like this.

Once at HHB, the GM and the supervisor (no longer awol), were up to their elbows in research. I found a report that hadn't been worked in four months because the position of the person who had worked it was eliminated. The manager who hadn't slept (thus was strung out) showed up.

I sat in the conference room most of the time waiting for someone to have a question or wanting to verify something with me. My knowledge of the company systems is fairly extensive and I know a lot of old systems that can still yield useful info for this kind of research, plus when it comes to this stuff I have a head for it and put pieces together.

I mentioned that I felt a little guilty sitting around collecting overtime.

"It's worth it Oz. You are a calming presence."

Time and a half calming at that. :)

This looks to be the Alien vs. Predator movie that they should have made the first time around... none of that Arctic pyramid bullshit.

Check out the trailer here.

I guess Wal-Mart rolled out a replacement to their "Always Low Prices" slogan, replacing it with "Save Money, Live Better".

This site has a few other suggestions.

A couple of updates to the Iron Man trailer...

here for a regular version.


Looks like the Black Sabbath music really is going to be part of the movie (or at least its publicity campaign). Too bad Godzilla didn't do this instead of committing blasphemy with Kashmir.

I'm more interested in hearing about the new game mechanics than the online toys.

A little Scotland to whet the appetite

Some of us went to the Columbus Scottish Festival today. It was small, we were only there for a couple of hours, and got out before torrential thunderstorms hit, but it did one thing.

It made me eager for the upcoming Ren Faires.

Because Doom commands it!

Your results:
You are Dr. Doom

Click here to take the "Which Super Villain am I?" quiz...

An amusing switch from the "what hero are you?" quizzes.

You can see more in the article here. The longer video shows more of the tie fighter image and manipulating the hologram.

I came across this article and it brought back memories of my cold war youth. I remember learning about radiation and how to build a fallout shelter when I was in school, probably 5th or 6th grade.


Now, I don't know much about the Slate... first glance is that it's a left-leaning online newspaper and others may have a better knowledge of it, but even if it is rabidly liberal you should read this article and be a little concerned. Not like there's anything we can do about it... but I'd rather know than not. 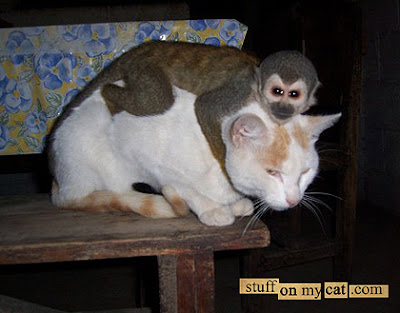 If you look through this blog you'll see a tiger with a bunch of piglets in tiger suits (okay, coverings with tigers stripes on them). That'd be like drawing a beard on a napkin and using it to cover a plate of prime rib and expecting me not to have dinner.