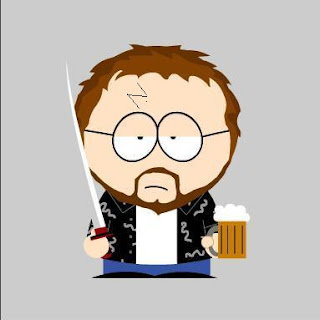 Dave sent me this after reading the comments by Flaire and I under the Harry Potter trailer.


I went into one of the stores I used to work at this week and one of the employees saw me and the first thing they asked was "how much have you lost?" People that see me frequently don't notice when I've lost a pound or two, heck I can't see the difference of a pound or two, so it feels good to get those kind of remarks.

I need to make sure to ask my friend Sherri to take a picture at Beltane with me standing in the same position as I am in my diet picture, so that I can compare the two side by side. That also means I need to take my kilt to the dry cleaners to get a good cleaning and pressing, because ironing it after I was it is a pain in the arse.

My friend Sherri found this news story about a northwest Indiana high school student who pulled out a flail and went after a classmate with it.

Figures, Lake County is my old stomping grounds, where I spent junior and senior high school and where I began playing D&D. Sherri speculated to our games list whether these girls played D&D... after all, who else would bring something like this instead of a knife or gun (traditional weapons of "The Region") to school?

My quip: When flails are outlawed, only outlaws will have flails.

Order of the Phoenix trailer

The biggest thing that I'm disappointed about is that John Williams probably isn't doing the music for this one either.

Wal-Mart innocent because Wal-Mart says so

The above headline should be in the Dr. Doom "Doom commands it" voice. Wal_mart announced that it investigated itself and found no evidence that it had conducted surveillance on "activist" shareholders that had submitted proposals for an upcoming meeting.


Right and there's no "evidence" that I drank that six-pack of beer. Because the trash man has been here already.

Paizo, the company that publishes Dragon magazine and Dungeon magazine, announced the both magazines would be ending as of the September 2007 issues.


In other words, WotC wants to profit off of the same stuff via an internet subscription system and doesn't want the competition from Dragon. Good thing my sub runs out in two months.

You can find others here. 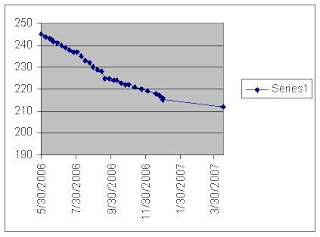 It's been a while since I posted one of these. The needle has been bouncing between 213 and 215 for weeks now. Of course, the "needle" is in my mind since I now use a digital scale, but you get the idea. Today the readout was 212.


Now I just need to make sure not to "reward" myself with anything that bounces it back up. Maybe all of the recent stress/rage at work has been slimming. If that's the case, I'll be losing more weight.

Look here for a much quicker and cheaper explanation of Marvel's Civil War.


Even quicker... a suoer fight blows up a small town, Iron Man becomes a fascist assbag, and Cap is dead... for now.


But the important question is... does she game?

Robert Rodriguez and Quentin Tarantino teamed up not to make a movie, but to craft an homage to the movie experience of bygone days. Rodriguez has shown in the past that when he is making a film as a personal project (Sin City), he rocks, and that when he tries to make a Hollywood blockbuster (Once Upon A Time In Mexico), he doesn't. And Tarantino is Tarantino, he follows his own drummer.


Now, I doubt that Grindhouse will be getting many nods from the Academy, but that's not the audience it was made for. It's a movie for the common people with the memories or at least a sense of nostalgia to appreciate all of the little touches. Granted, Rodriguez does get a little carried away a couple of times with the well-worn reel of film in the projector gimmick, but the "missing reel" trick actually saves the audience time otherwise lost to exposition and extraneous character development.

Since Rodriguez's "Planet Terror" is a zombie-flick at its core, you really don't need to invest a lot of extra time developing future zombie-chow. Just like it's a movie you're not supposed to think too much about (if the machine gun is her leg, how does she pull the trigger?). But if you accept it for what it is, gory, messy and witty without being pretentious, you'll probably enjoy the flick.

Tarantino's "Death Proof", despite the much lower body count, is much more suspenseful, and even truncated by the missing reel, the characters are quickly developed and believeable (well one is far fetched, and Kurt Russell is obviously having a good time) so that you care about their fates.

The faux trailers are also very amusing. I was a little disappointed that there weren't more nuggets in the credits... there were just enough random pictures to make you think they could slip something in.

Grindhouse is bombing in theatrical release, which is a shame since I don't remember the last time I heard an audience enjoy themselves that much. What I think will be great will be when it comes out on DVD and fans can get together for a "Grindhouse Party". It would really rock on a large tv in a dark room, or in a home theater with a projector (hint, hint). Get some friends, some snakcs , some beer, and have a blast.

But you might want to skip the chunky salsa. 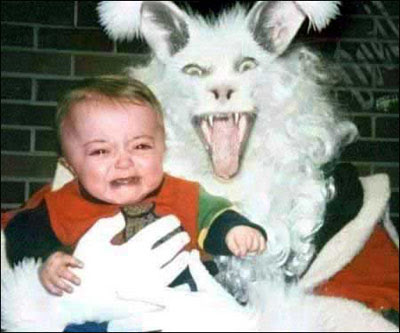 Yes, I'm a baaad man because the picture made me laugh. Since I'm a pagan, I don't celebrate Easter religiously, in fact none of my family does. But it is one of those occasions we get together at my folks' house to do what families do at holidays... eat. We have three of those holidays: Thanksgiving, Christmas, and Easter. We probably need one in the summer, but those are the three days my work is closed so I'm assured of a day off.

Looks good... but then trailers usually do.

Of course, this is supposed to be on the 2.1 DVD... in other words a reason to shell out money for a movie that you already own.

A couple of weeks ago I wrote an entry highlighting an article about Best Buy experimenting with a flexible schedule with some of its employees. This week rival Circuit City launched its own experiment by not scheduling its 3,400 highest paid retail employees. As in firing them. You can read more sordid details here.


This move strikes me as, what's the word I'm looking for? Oh yeah... stupid. If people are making well over the "range", that means that they are most likely highly experienced. Assuming the average savings is $5 an hour per employee and all of those employees were full-time, we are taling about a savings of $3.5 million. Assuming that you don't lose sales because your most tenured people have been replaced by people willing to work at Wal-Mart wages. And don't make any costly mistakes. Oh, and are free to to train.

I wonder how hard it would have been to shave that $3.5 million from say the top 10 executives ay Circuit? What kind of bonuses did they get? No wonder it's going in the toilet.

I would say that this is fallout from the TV Wars Bloodbath created by Wal-Mart over the holiday season, where Wal-Mart turned flat screen televisions from a good margin category to a poor one. Tweeters and CompUSA both were badly hurt by Wal-Mart's poison-the-well strategy, and I'm sure Circuit was also. But about a year ago Circuit closed several stores, and a year or two before that they fired all of their commisioned sales people. So it looks like Circuit is to blame for its own woes.