I thought I'd finish with something humurous while I wait for my laundry (you know... it really helps to turn the washing machine "on").

A couple of significant things today. The first is that she actually went to the food dish on her own between feedings, which is a really good sign. The other is that she came into my den while I was on the computer and asked to get in my lap. She spent about an hour curled up into what appeared to be very uncomfortable positions (par for the course for her).

The only thing I'm leary off now is that she has a cold (that or she's developped my havfever). It doesn't seem serious, she's just a little sniffly at times and sneezes.

Still, it's a far cry from last week when I sat in the middle of my livingroom clutching her to my chest convinced she was going to die any moment.
Read the rest!

OK, time to lighten things up a little. A friend showed me this site, and it's hilarious. It started with the guy sampling wierd food from the grocery store... now you'll have to see it for yourself.

Kuriko continues to improve. She is eating consistently and keeping it down and her coat is back to normal. She still walks funny but is getting faster, sits upright, and when she sleeps she looks normal as opposed to just collapsed.

My friends and I had talked about going to Chicago for the weekend, but I still wouldn't feel comfortable leaving her alone overnight. Maybe in a couple of weeks.
Read the rest!

Today was the first day I didn't dread coming home from work. Kuriko is still very weak, but she has started eating without needing the pills, has started grooming herself again, and generally looks a little better.

I don't want to get my hopes up yet, but I'm keeping my fingers crossed.
Read the rest!

She ate more than the past two days put together, mostly baby food, and I managed to give her the subcutaneous fluids. I spent about two hours holding to my chest crying while she purred.

Right now she's nibbling at some food as I get ready to go to bed, and I moved her sleeping box by the food so that hopefully she'll come out to eat.

The only reason I'll be able to fall asleep is that I'm exhausted. And I'll dread getting up in the morning and checking on her.
Read the rest!

I knew it would come sooner or later... she's something like 17. But it's tearing my heart out anyways.

We went back to the vet. Her thyroid levels are normal now, which means the medicine is working, but now she's almost totally stopped eating. So the vet gave me some medicine that is supposed to make her hungry and taught me how to give her subcutaneous fluids (and I am a huge wimp with needles).

She'll eat a little bit, but she's weak and moves slowly. She can barely jump into and out of her box. She just seems so old now, so tired.

I don't know what's worse... the waiting, or the wreck I'll be when it finally happens.
Read the rest!

Revenge of the Sith

Did Lucas redeem himself? Mostly. But not completely.

I'll try to keep this spoiler free (but consider the comments a spoiler zone). The first half kind of dragged, as in pacing. I know, there was a lot that needed to be set up, but it was slow.

And Lucas can not resist the urge to be cutesy. OK, I can accept the comical, high tinny voices for the skinny battle droids, but the beefy super-battledroids need some base in their voice. Since fan hatred has exiled (rightfully) Jar-Jar to the land of lineless extras, Lucas used the droids for comic relief, and of course over did it. And no one in Lucas Films had the balls to say "George, that's just too silly."

And did it seem to anyone that Palpatine was channeling the Joker during the big fight with Yoda?

The action in the second half was much better. My only complaint about the final duel was there should have been less time spent on balancing acts... it's like Lucas can't resist a chance to use more CGI and greenscreen.

I did like that I saw several parallels between this movie and the later ones. Several key scenes remind you of the original trilogy.

At the end, most fans will be fairly satisfied, but not standing up and cheering. For that, the following scene needed to be added...

That would make people cheer.

My rating: Three and (snap, hiss, splork) a half flying monkeys.
Read the rest!

Just when you thought you'd seen it all... be sure to check out the photo galleries. Not only was there an Elvis trooper, there was a Captain Jack Sparrow trooper (?) ... the same guy that was at GenCon as Capt. Sparrow.

I'm still mentally digesting Revenge of the Sith so I can write my review.
Read the rest!

A bunch of fan film stuff. I haven't had a chance to watch them all, but Imperial Chopper is a must see... I wish we had bikes like this in Galaxies.

Revenge of the Brick

Another Lego Star Wars movie, this link was forwarded by my friend Dave Toomey. Hopefully it's not better than the real thing ;).

I had to take Kuriko back to the vet Monday. She was due to go Friday for follow-up blood work, but she started having blood in her vomit again. This time I took her to the vet I'd used in the past. While examining her, the vet noticed that her molars were abscessed and had a huge build up of tartar (something the vets at the emergency clinic missed), so she stayed overnight for dental surgery.

I brought her home yesterday, but she is still skittish. She hides in the cat carrier, and if she comes out of it to eat or go to the litterbox (or I take her out to give her medicine) she runs right back to it. Hopefully she settle down soon. I hate that she associates me with just getting meds, so I'm not dosing her when I feed her and waiting a while.
Read the rest!

Revenge of the Sith review

There have been a couple of reviews so far for RotS, and both I've seen have been positive. The one I have linked here do have spoilers, so be warned.

Time to cue up the soundtrack again.
Read the rest!

As an adolescent boy, the Dukes of Hazzard was the perfect show. Fast cars, dynamite arrows and Daisy Duke... what more could a boy ask for (pre-cable, that is)?

I'm not sure what to think of the movie coming out. I'm still trying to figure out is they are making fun of the original show or trying to do a serious remake. If their not making fun, why do they have Stifler Duke?

And Jessica Simpson as Daisy Duke? Well, she is certainly smoking hot, but will Daisy just be a southern fried ditz? Seems like she used to be smarter than the Duke boys.

The one stroke of casting genius in this movie is Willie Nelson as Uncle Jessie. Too bad Waylon Jennings isn't still around. That makes me wonder... will the movie stick to the show's country twang roots, or will it succumb to Hollywood rock (as it appears in the trailer?
Read the rest!

Who hasn't wanted a real lightsaber? Well, you still can't have one, but if you're a lightsaber fan this article should amuse you.
Read the rest!

I need to post this pic on my fridge... 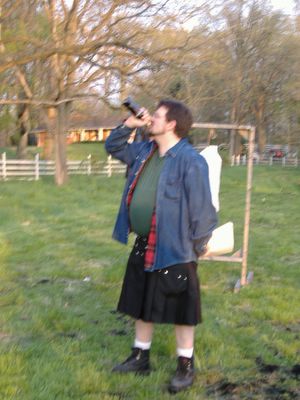 This was taken at our Tribe's Beltaine Contest and prominently shows my gut. :(

The good news is that I've lost 9 lbs since I've started my new job. Basically all I've done is cut out fast-food lunches. I'm still not hitting my 3 times a week goal for the gym, but hopefully now that things are calming down at work I'll quit slacking.

If I need encouragement... there's alaways this pic.

PS: You can see my friend Sherri's blog entry that I got this picture from and explains our event a little here.
Read the rest!