If you can only make it one day to Gen Con, Saturday is the day to go. It is the day with the most people, the most costumes, and the most parties. It was rather novel for me to start Saturday so early. This year the big LARP I play in, Brass and Steel, was a 3pm - 9pm event instead of the usual 6pm to midnight, so I wanted to get going earlier anyways. 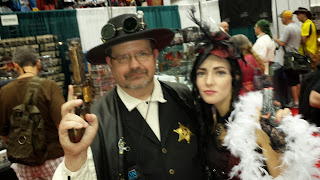 I put on my Steampunk Texas ranger costume (my character in the LARP) and hit the breakfast buffet in my hotel. The busboy showed my his Gen Con badge, enthusiastic for when he would get off of work and get to go to the convention. An older employee asked if he could take my picture, the first of many pics that day. After finishing my bacon heavy breakfast, I headed for the ICC.

I tell people that even if you can't go to the convention, Georgia st. is a great place to hang out and people watch. Fortunately it wasn't sweltering hot as it had been recent years, so that made hanging outisde a lot more pleasant. I hit the ICC right when the Exhibit Hall opened but checked out the Auction Store to let the crowds thin.

The one downside to Saturday is that it's the most crowded. In addition to the sheer number of people, since it's the biggest costume day, people taking pictures of cosplayers add to the traffic complications. I try to watch out for people trying to get photos and not walk through their shot. When people asked to take my picture, I tried to stand where I'd impact traffic less.

Everyday of Gen Con I hit the X Hall, and every day I see something new. I strolled the hall for a while, navigating the mass of humanity and keeping an eye open for any last minute additions to my costume while visiting the booths of people I know. When @knharter arrived with her daughter (who was born during Gen Con one year, so now Gen Con is like a birthday party for her), we met up.

There's a rule for how often someone gets asked for pictures. When you have more than one person, the frequncy goes up. Add kids in costume, it goes up again. So as we made our way around, we stopped for multiple photo requests. Every one was really polite, only taking pictures after they asked or when we were obviously already posing for pictures. I'm just disappointed I haven't stumbled across any of them yet.

Later that afternoon was the Brass and Steel LARP. This year it was held upstairs in Union Station, which helps set the mood a bit. The earlier time slot I think worked better, as people weren't tiring out towards the end. There were a lot of great costumes and a lot of great role-playing - the scenario was a diplomatic one, so it relied a lot more on the players than on game mechanics. Again, I wish I had remembered to get pictures of us in costume.

After the game, several of the people from the LARP went to the RAM. I was surprised that we got seated in relatively short order despite the number of people in our party. After the RAM we headed to the Cosplay Deviant party being thrown at Revel, a downtown club.

Once upon a time, White Wolf used to throw the big party at Gen Con. However, since White Wolf stopped heavily participating in the convention, the party went away. I'm not sure if this was intended to be a successor to WW parties, but it has potential. I was surprised how fast the VIP tickets sold out at $100 a pop (they included booze), and also surprised that they didn't sell enough general tickets - $10 each - to get the whole club.

When we arrived the party had been under way for a couple of hours and I thought someone said that the VIP booze had already been depleted. The VIP section was mostly typical looking gamers sitting in a line against the wall watching the dance floor with a couple of dressed up girls moving among the areas. We went upstairs where the bars were less crowded and we could look over the balcony and see most of the club.

Some of the muggles didn't know what to make of us. I had to explain what Gen Con was all about a couple of times, got a few free drinks, and was challenged to explain quantum physics after I made a Big Bang reference. I pointed out that I wasn't a quantum physicist or any kind of scientist for that matter and was rather drunk, but my explanation was deemed "close enough". By now all of my friends from the LARP had already called it a night, so I headed out just before last call to try to sleep off the evening's festivities.