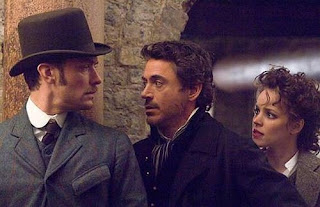 Watching Sherlock Holmes makes me want to run a Steam Punk campaign. While overall Avatar was more entertaining and full of omgawesomesauce, I didn't get the urge to create a campaign set on Pandora. Holmes on the other hand got my brain churning on ideas of a Victorianesque D&D world.

But I digress. Sherlock Holmes turned out to be a solid and fun movie, in a way a break from the explosions and CGI wonders of the movie season.* As long as you aren't attached to the old movie image of Sherlock Holmes, you'll like this movie, and if you have a fondness for for Steampunk, there is just enough of a dash in this movie to notch it up for you (and if you have no idea what the heck Steampunk is, you won't notice).

The chemistry between Downey and Law as Holmes and Watson is great. Yes, Robert Downey Jr. is a bit over the top, but it keeps the movie fun. One of the things that was neat was how Holmes would use his analytical mind in fights, done just enough to be cool, not so often as to be annoying or make Holmes unbeatable.

Some of the central scheme is a bit... out there, but it's hard to say more without spoiling. I guess an over-the-top scheme to go with an over-the-top Holmes. And yes, the movie sets up for a sequel, which I hope gets made. Judging by the audience at my showing Holmes will do well. There were especially a lot of older people at my theater to see Holmes, more so than any movie I can remember.

* Yes, there are explosions and yes CGI was used for the Victorian background, but neither are the heart of the movie.