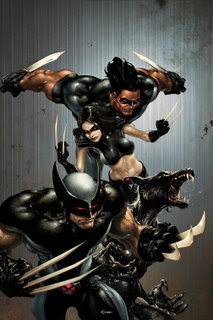 I used to buy every title that came out with an X on the cover or one of the X-Men in it. After years of crappy miniseries, I've finally been broken of this habit.

So why will I buy the first issue of this new X-Force?

Probably because I like all of the characters and I'm intrigued by the concept (but I'm hoping some of that concept art never sees printed page). I'm hoping it will bring Wolverine into what he should be... the best there is a what he does... being a bad-ass. None of this metaphysical crap they've been pulling in the main Wolverine book, none of the ridiculous even for a comic book super-duper healing factor where the flesh is burnt off his bones and two minutes later he's up and killing. That kind of shitty writing takes out any illusion of suspense.

A lot of people hate X-23, I think in part because they hate Wolverine, and X-23 is a "clone" of Wolverine. They also hate anyone who has a World of Warcraft character with better loot or that has a bigger action figure collection. But X-23 isn't a true clone of Logan, she's more akin to a genetically-engineered daughter. If you don't believe, read the origin material and compare her to her "mother"... Sarah Kinney provided more than just a womb, she also provided some of the genetic material despite what the "plan" was.

Warpath, I just like because he's such a no nonsense character. Wolfsbane is an interesting choice as you'd think her beliefs would be diametrically opposed to a black-ops situation. Hopefully there's a story behind the change (as opposed to the change between her appearance in New X-Men and X-Factor).

OMGs is that my James? Holly says Yay!