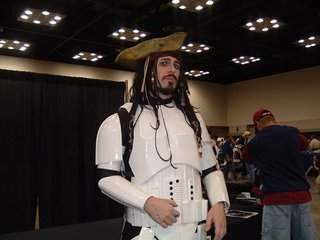 The best way to sum up this movie is that it is the "Empire Strikes Back" of the Pirates Trilogy. Once you see it you will understand, trust me.

That's not necessarily a bad thing. Some Star Wars fans regard ESB as the best of the original trilogy. DMC has the unenviable job of turning what was a stand alone movie into a trilogy, which means not everything is resolved.

A lot of the original characters are back, almost all of them. Even the undead monkey, which for some reason remains undead despite the Curse being broken in the first movie.

This movie is a bit slower paced, and some of the action set pieces just seem to be there to provide action and are more unbelieveable than any in the original. It seems like the writers came up with some of these first, then wrote the overall plot.

That being said, it is still a good movie though not on the par of the original (which I rate at 5 fm). Fans will be more forgiving, especially since Depp remains in top form as Jack, I mean Captain Jack Sparrow.