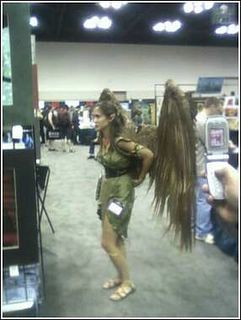 GenCon 2005 was probably the most fun I can remember having at a Con (though to be fair I can't remember much of GenCon '84 (aka Uncle Ozzi and His Followers... or was it '83?) I think the big thing is that I had some many friends there that I could find someone to hang out with whenever I wanted.

I got to play the new Serenity RPG (which sold out quickly) despite not having pre-registered for the event, partly through luck and partly through stubborness. Of course, playing Inara wasn't my first choice, but I got to play (and verbally emasculate "Mal" by pointing out that Inara could pilot better than Mal).

Thursday night we went to the Party on Plaza. I had just finished telling a story about how I met some friends from college and the fact that their son had just started at the same college we attended. A guy in our group was checking out someone behind me and said something like "she looks like a lively one." I did the casual half turn in the chair so I could see who she was, saw her, then snapped my head back around.

"Dude, you're checking out my friends' daughter." Talk about feeling old.

We then went to the True Tavern, which is a large area decorated as the cliche tavern that characters meet up in before the adventure. Two cool things about it was that there was a dark "alley" area that included a secluded Rogue's Lair. The other cool thing was a True Cash Bar.

Some of us took over the Rogue's Lair, chasing off the lecherous and drunk "rogue" that was hanging out back there. Then when other gamers stumbled across the "Lair" we did what came naturally... started role-playing as though we owned the place. Messing with wandering gamers became our favorite new sport.

Friday was wandering, a seminar and another gaming session. One of the things a love about GenCon is that among the thousands of people there you'll run into people you know. A friend of mine was volunteering at an info station and I was hanging around between the seminar and the gaming session. A guy came up to ask for directions and he seemed familiar. I saw his name tag.

"George? From northwest Indiana?"
He looks at me, then reads my name tag. "Ozzi-san?"

George and I gamed together when we were in high school and we hadn't seen each other since GenCon '89. We caught up with each other (he has a 16 year old daughter... feeling old again) and exchanged contact info. Of course, we ran into each other again something like three more times over the Con.

I wore my kilt Friday (and Sunday) and found that it was like being in a big club. You couldn't go down an aisle without encountering some kilt-wearers and I was asked repeatedly where I had got mine and where the Utilikilt booth was. A friend of mine pointed at me when he first saw me that day and told me to stay at least 5' feet away. Then I pointed out that he was showing more leg in his shorts than I was in my kilt.

The game was a homebrewed bastardization of AD&D and Runequest. While GM was good at narration and making judgement calls, he had serious pacing issues and was trying to put an 8 hour adventure into a 4 hour slot, not to mention teaching players a custom game system. Also, there we're two... how to put this delicately... asshole players. They got really pissy when it looked like the GM was going to my friend and I the characters that they wanted, then when the GM had us roll dice to see who got the characters my friend and I won. Eventually the assholes (one of whom used a calculator instead of dice) decided to leave, though they did make a valid point about the GM's pacing issues. Jason called to let us know that he was heading for the True Tavern. I made an excuse and handed my character to one of the GM's friends who was watching.

Once Jason and I went back to the Lair, there were two college couples hanging out back there (wonder what they were doing back there in the dark... ). After a while, when they realized we were there for the duration, they left. Jason had a bunch of tokens from the True Dungeon and had been through the True Dungeon. He would trade with the "adventurers" who came back, and if they role-played he'd give them a tidbit of info and let them trade one of their tokens for a random pick from his hoard of tokens (which was seeded with some good items). Once my friend escaped the aforementioned custom game, she joined us, guiding adventurers to Jason. My job was to drink and provide commentary in the quasi-Gaelic brogue that all of my accents devolve into. Eventually we got kicked out by the staff, but it was 20 minutes to close anyways and the last group of adventurers had already gone into the Dungeon.

Saturday I went in costume. Being the ham that I am, I enjoy getting asked to have my picture taken. One of the artists in the art show had me pose for shots from a couple of angles against a white background because he liked my costume so much, so maybe I'll end up in a painting or in a gaming product. Or my own Magic Card ... "Laird Oz (green & black) taps mana for beer".

Speaking of Magic, I watched a friend of mine, trade cards worth somewhere around $1500 dollars. Makes me glad I never got into Magic, but makes me wish I'd bought a pack or two when they first came out.

We went to the Costume Contest. I go every year, but I don't enter. There are lots a good costumes, a presentation or two that goes on two long, and invariably some girl trying to karaoke a Japanese Anime song in a painful performance. In fact, the talent portion they might as well just gone ahead and awarded to the 2 girls that win every year with their step-dancing routine (every year they've done a different number, and every year they blow away the rest of the talent entrees).

The Best of Show came down to two costumes. One was the Red Death, from Edgar Allen Poe. It was this huge, articulated, robed skeleton that was about 8 feet tall. It was really well done, as not only could the wearer walk, but he had a great deal of motion in the arms and could gesture quite well. The other was a winged elf... a cute brunette I've seen at the past two GenCons, I believe as an elf both years, with lots of green and brown in her outfit in '03... not that I noticed. Anyways, she walks out onto stage with these beautiful wings composed of 3000 feathers and the crowd is dead silent. Then as she bows the wings unfurl and the crowd explodes.

When it came down to the final applause-off, it was obvious she was going to win, though the Skeleton wasn't going down without a fight (in fact the two of them did some posturing when someone suggested letting them fight for it). When it came time for the Skeleton's applause he started step-dancing. The MC couldn't talk for at least a minute from laughing.

After that, we went to a friend's house to watch a movie. The original thought was that a couple of us would go to the White Wolf party after the movie... but we ended up watching Return of the King. The extended version. So by the time the movie was over (around 1:30ish) we were ready to call it a night. I haven't heard how the party went this year, but last year there was about 10 guys to every girl, and probably 2/3 of the women were White Wolf employees, so I probably didn't miss much.

Sunday was the wrap up. You could tell people were dragging. I trolled for any crazy-stupid end-of-con bargains, picked up the magnifier I had ordered for mini painting and bought a few other things I'd put off until the last minute. After that and having an end-of-con toast at Rock Bottom, did a little mini painting, and saw Batman Begins at the IMAX. As I drove home past the convention center, it was a little sad seeing everything coming down. But there's next year. And maybe GenCon SoCal. And GenCon Europe... am I getting carried away?