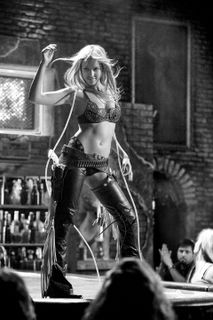 I was not disappointed. Robert Rodriguez redeemed himself for Once Upon a Time in Mexico and turned out an excellent movie. I would probably be in rapture if I had read the comics... everything I've read has gushed over how faithful the movie was to Frank Miller's work.

I'll have to go see it again. And buy the DVD when it comes out (which will also have the three story arcs in the movie also available to watch totally independently as they appeared in the graphic novels, complete with extra footage).

And of course the visuals were awesome. It won't be nominated for Best Picture, but I could see Cinematography, Art Direction and Editting nods. And speaking of visuals... well see the above picture. :)

Sin City gets 5 out of 5 flying monkeys.

(I really need to get a flying monkey graphic for this).

I noticed the time that these posts were done. Why are you posting to your blog at quarter 'til six in the morning? Please tell me that you weren't up all night playing Star Wars Galaxies. :)

That time stamp is quite odd... my only guess is maybe it's on Pacific time and I was up fairly early.

I've been moderating my SWG time... but now that you mention it, I haven't played for a few hours...