Sunday used to be the day of the gaming dead at Gen Con, with everyone spent from the last three days of activity overload and sleep deprivation, with a side of unhealthy eating and maybe some imbibing tossed in for good measure.  Since Gen Con has added Family Fun Day to Sundays, letting a family of four in for one low price, it has breathed new life into Sundays.

For W! and I, the first order of business was to strike camp and evacuate the hotel room.  I had no games scheduled for the day, it was pretty much bug out of the room then troll the X-Hall until the con closed. 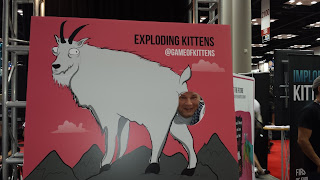 The crowd in the X-Hall testified to the success of Family Fun Day.  My goal was to take a quality trip through the art show, then look for anything I might have missed, because it seems like no matter how many times I go in the X-Hall, I always find something new.

We met up with N! and accepted a quest to find a stone d20 that wasn't part of a set and wasn't stupid expensive.  Our path through the X-Hall looked like one of those Family Circus cartoons, taking us almost everywhere except Artisan Dice.  We never found a die that matched the criteria, and it turned out Artisan Dice didn't have what N! was looking for either.

Lunch was a brats from the concession stand in the X-Hall.  It was quick and we really didn't feel like walking any where for lunch.  As the the time wound down to closing time, we ran into friends doing the same thing.  The announcements began, warning the crowd of the impending closure, then final the closing announcement, accompanied by the cheers of tired exhibitors.

I was surprised when I learned that unique attendance was down a hair (roughly 1%), but the turnstyle attendance jumped a couple percent, meaning that more people were attending multiple days.  Probably the shortage of downtown hotel inventory is capping attendance.  Since that is unlikely to change soon, for Gen Con to increase numbers, they would have to target more locals, as well as people willing to make a day trip for a single day (given that Chicago, Cincinnati and Columbus are all within roughly 3 hours, totally doable).  Of course, Gen Con really doesn't *need* to grow their numbers if they are making a profit, plus then overcrowding becomes more of an issue.