For me there are two major things regarding Saturday at Gen Con.  One is that it is the big day for cosplay.  The other is the annual Saturday Brass & Steel LARP.  I generally kill two birds with one stone by dressing as my LARP character all day.

I had also planned on doing some serious shopping in the X-Hall seeing as I hadn't spent much time in it.  I'm always on the lookout for new costuming bits, and you can never have too many dice.  Lunch was a quick break at the food court outside the hall, which was convenient and not quite highway robbery - the chicken tenders and fries was something like $6.75 (not bad) but the large soda was in the neighborhood of $3.75 (ouch - the price of convenience).  After lunch I continued to shop until N! let me know that she was there with her daughter. 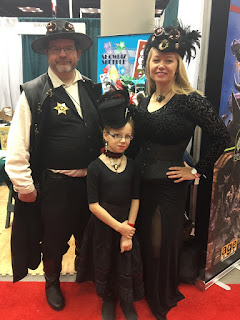 
After N! and her daughter left, I shopped a bit more, bought a couple of third-party 5E books (for additional game fodder and to support the 3P5E business) and dice.  About an half an hour before the X-Hall closed I met up with W! for dinner (always try to beat the X-Hall exodus).  This time we went to Loughmiller's, a small pub tucked behind the Marriott that somehow I'd missed for the past dozen years.

The crowd was a mix of GC attendees and muggles.  I drew a couple of looks in costume, but I think most of the muggles had become inured to seeing strangely dressed nerds.  It seemed like the pub was short staffed, like someone had called off.  Our waitress, an obvious veteran of the service industry, was brusque but not quite rude.  I had something called a skillet burger, which was a burger on a piece of sourdough toast smothered in chili and cheese, served in a skillet.  It was actually pretty good and I would definitely order it again.  W! tried the "butter beer" from their Gen Con themed menu and could drink most of it as it was too sweet (vanilla vodka, buttershots, creme soda topped with whipped cream).

The LARP theme was a Mardi Gras masquerade party, set in 1908 in the Brass & Steel steampunk world.  This was an intrigue sort of LARP, not a run around with boffer weapons LARP.  I managed to keep my "Texas drawl*" from turning into my typical quasi-Gaelic brogue that emerged whenever I try to do accents, having the character's "aw shucks" routine down after playing him for three years.  I did slightly go off the rails once I decided one of my original objectives was unachievable and made up my own objective.  Being an introvert, playing the LARP requires me to come out of my comfort zone - one of the reasons I do it. 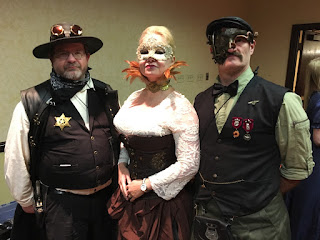 One of the things that always impresses me about the players of the LARP is the costuming.  While not everyone is in costume, some players go all out.  Hopefully more pictures from the LARP pop up.

After the LARP some of us decided a night cap (read: beer) was in order.  Given the late hour, our choices were limited, so we gambled on trying the Ram.  We managed to get a table in the bar but were informed that the kitchen had just closed.  One of our party really wanted something to eat, and the waitress came through with an order of chips that had been accidentally made as extra.  Some friends that had played in a Cthulhu LARP joined us, so we traded war stories.

After that, it was time to call it a night, heading into the final day of Gen Con 2016.