A hangover isn't a great way to start Gen Con. Fortunately, it was only what I call a 1-alarm hangover, remedied by hydration, a shower, and breakfast. I had considered hitting the breakfast buffet (or as I call it all-you-can-eat bacon), but kept it simple with pop-tarts and caffeine. In previous years, I hit the buffets most mornings, but they keep jacking up the prices to the point that I don't think I'm eating my money's worth.


I made my way to join the growing horde outside the Exhibition Hall (or as I call it, X-Hall). I decided to wait on the balcony level as there was nothing I was chomping at the bit to get, plus the atmosphere was probably less funky. 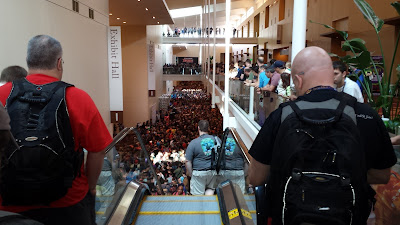 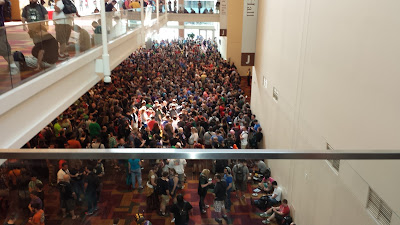 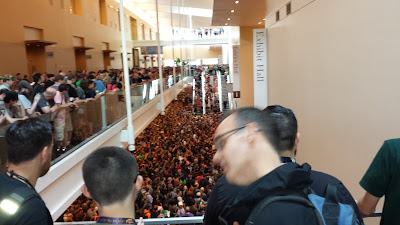 Finally, after exhortions not to run/trample/stampede, the doors were thrown open and thousands of chanting gamers marched into the X-Hall. I wonder if the vendors felt like the Spartans being marched on by the Persians? Once the crowds had flowed in, I made me way downstairs for a quick preview of the X-Hall. I only had a little over two hours before the game I was running, and given the enormous size of the X-Hall, I wasn't going to have time to even quickly walk the whole thing. Plus I had to leave myself time to eat. 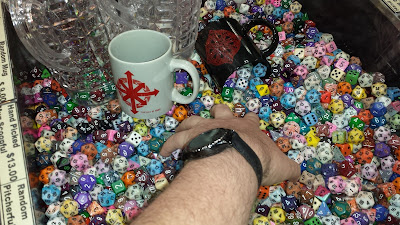 Blessing the dice in the X-Hall for N!


Speaking of lunch, I figured the fastest way to go would be the food trucks. Here's a tip - the trucks on Georgia Street are going to have longer lines than the ones around the corner on Capitol Street (at least according to my observations). If you go during prime food times, expect a wait (but less than a restaurant), and several of them have good values.


This is the second year I've run games for Pamean Games, the creators of Brass & Steel. The core mechanic is real easy for newcomers to pick up, making it a great con game, while there are more advanced options well-suited for more experienced players. This year I had a full table (including W!), though only one had played before. The vetaran player knew the game better than me but was cool about it, not trying to rules-lawyer like some players in a similar situation might do.


The scenario basically consisted of two factions (Russian and British) working together even though their motives started out at odds. The set up was intended to produce some rivalry between the two "captains", but the Brit pretty much rolled over for the Russian. Though to give the Brit captain (a new player) credit, he came up with a use for his arcane powers that pretty much saved everyone's bacon during a sniper ambush.


W!, N!, G! and I went to Thai Paradise for dinner, heading there before the X-Hall closed and a ravenous gamer horde was ejected into the city. It was close enough for an easy walk (on Market St.), but enough off the beaten path to not be besieged. I kept things simple and safe with medium spicy Thai fried rice, which was pretty good even for a picky eater like me.


Afterwards, W! and I went to the Georgia St. beer garden to hang out, crowd watch, try the new Gen Con beer, 20-Sided Rye by Sun King (not bad, but I like Wee Mac better), and for W! to catch Pokemon. We called it any early night as we had the Orc Stomp 5k at 6 a.m. the next morning, and of course like an idiot I stayed up and watched John Carter on television (not that I would end up sleeping anyways, but that is a lament for Day 2).