Persona Dramatis (for all my Gen Con blogs)
Oz – Me. Hopefully I won’t write about myself in the third person, but accidents and beer happens
W! – Long time friend, one of my players, and my roommate at GC 2016
N! – A friend I met at Gen Con 2004, frequent partner-in-game
G! – N!’s brother, a total noob. Wait, I shouldn’t have said that, I play in his game.

My focus on Wednesday is the Stink. I collect swag donations from Gen Con and exhibitors and transport the Nordic Distance Dice to the Union Station Grand Ballroom, so I try to be onsite early. In recent years I’ve started staying downtown for the duration of the con. Yes, it’s expensive, yes, I only live 30 minutes away, but it lets me spend a lot more time at the convention, frees me from worrying if I have a beer or three at the end of the evening, and gives me somewhere quiet to retreat. I found out at the last minute W!, who was splitting the room with me, was riding with me, so we played Tetris in my little car, stuffed with luggage, provisions, and brand new cooler for the surprise room party, and my 2-wheeler for lugging stuff around like monster-huge dice.

We got there early enough that there was plenty of parking under the Marriott, where we were staying. As an added bonus, there was a room ready so we could unload and be done with it.

After we finished establishing our base camp, W! went to get in the will call line, which stretched all the way from registration to Hall A in the convention center.

W! ended up being in line for about an hour and several Pokemon. He swears that going forward he’s having his badge and tickets mailed (which is what I always do). While W! was stuck in line, I roamed the convention center, checked out the program guide, and watched the crowd. I would say the crowd was surprisingly large for Wednesday, but in truth it has been getting bigger and bigger. There is more for early birds to do every year.

Eventually I got my annual “Christmas Eve peak”, where I go into the Exhibit Hall on Wednesday to pick up swag donations from exhibitors. I was on a mission, so I didn’t have time to look around, but it’s still neat to see what goes on behind the scenes.

Set up for the Stink went like clockwork. Almost all (if not all) of the Mavens have done this for several years, so everyone knows their job. Fifteen minutes before go time, we were ready, even with some last minute rearranging and swag packing. 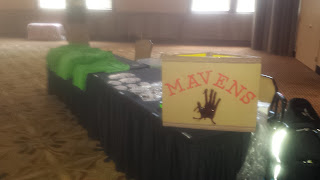 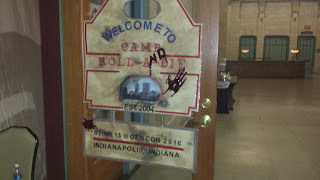 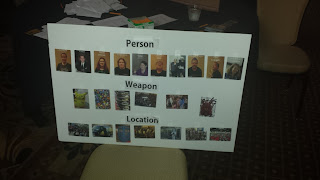 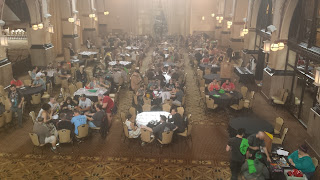 The first hour and a half was linetastic. Despite our best efforts, people at conventions see a line, they get in it. We managed to keep the swag line moving with some cat-herding, and if anyone complained it was their own fault for staying in a line after the swag even though they could go ahead and sit down.

After the Stink, which had about 400 people, I grabbed a slice of Dragon’s Breath pizza from Hot Box Pizza (no line, reasonable price, tasty pizza) on Georgia St., then headed back to my room for the room party, where I expected something like 4 people.

The count was closer to 15ish. Granted, they weren’t all there at once, and some just stopped by to say hello, but we had up to a dozen in the room at once – which gets really loud in a hotel room, especially after copious amounts of beer, wine and whiskey. Fortunately no one pounded on the door telling us to pipe down.