I usually say if you can only go to one day of Gen Con, go Saturday. It is the biggest day, it is when the cosplayers are out in force. It’s also when historically the best (public) parties happen. Plus, it’s when the big Brass & Steel LARP happens.

As I’ve been running games mostly while the X Hall was open, my plan was to spend most of the morning and afternoon in and around it. It’s where there will be the most to see people wise, plus I want to see if I missed anything during my hurried passes through on the previous two days. 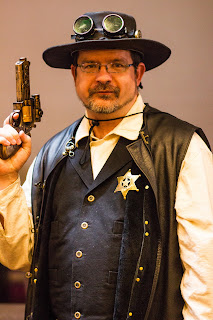 Because I stayed downtown the whole convention, I only brought one costume, my steampunk Texas Ranger for the LARP. Fortunately not only was the weather decent, but I could stay indoors the whole way if I wanted. Air conditioning is a bonus if you’re wearing an extra 20 pounds of leather.

The crowding was insane at times in the X Hall. Gen Con broke another attendance record, at over 61k attendees, and it seemed like they were all in the X Hall. Of course this is exasperated by people’s insistence at towing luggage behind them or wearing huge backpacks the clean out half an aisle when they turn.

Lunch was at the Ram, taking a break from the madness. We’d thought by going after “regular” lunch hours, it wouldn’t be as nuts, but the Ram is popular with Gen Con attendees. Sadly, despite the upfront effort that the Ram puts into being ready for Gen Con, the experience (for me) has been declining. Service was slow, Weasel’s meatloaf sandwich tasted “gritty”, and the staff didn’t seem friendly compared to other locations.

I went back to the room to cool off for a bit before the LARP. It was nice to be able to take off the leather coat and hat and sit in the path of the AC for a bit. Having a room on site was really handy. If we get a similar room next year I’ll probably bring an additional day of costuming.

I headed to the LARP, grabbing some Brazilian chicken from one of the food trucks on the way. It was good to see some familiar faces at the LARP, there are players who have played year after year, some maintaining the same characters. I spent 5 hours suppressing my natural introvert instincts, plotting and scheming with and against 40 other people. As usual for the Brass & Steel LARP, a good time was had by all. 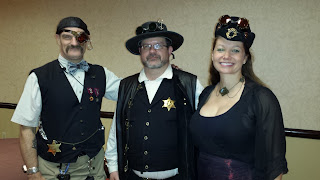 After the LARP, the B&S team invited people to join them at the Ram. I was hoping things had improved, that maybe lunch had just been an off experience. To give them credit, they did seat our party pretty quickly, especially for the size, but I was never asked if I wanted another beer after my first (and only). Of course, I did. Most of the televisions displayed sports instead of nerdery, I’m sure a concession to the muggles.

After the Ram, a friend and I decided to check out the Cosplay Deviants party. I’d had a really good time last year, especially once the muggles were let in. This year, it was in a different venue. By the time we got there, they were already letting muggles in, but we got to cut the line since we were Gen Con attendees. Inside was loud, hot, and full of people that didn’t want us there. We stayed for one beer and left.

I’d like to say that the Deviants party is the successor to the White Wolf parties, but based on this year that seems dubious.