This would prove to be the longest day of Gen Con, both in time and distance travelled (22 hours and 10+ miles). Up at 5 and out to the mustering area, a bit of a walk itself, we were ready for the Orc Stomp 5k. I was already regretting putting off returning to my long forgotten gym regimen until a couple of weeks before Gen Con. Finishing wasn’t an issue, but I was dubious about beating last year’s time, which was just over 47 minutes. 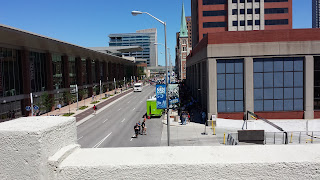 The weather was about perfect. We moved to the back of the pack, letting the real runners go first. Despite a twinge in my arch right after start, I marched the course at a 4 mph pace, finishing just a hair better than last year at 46:29.5. Trodding back to the hotel, having a room downtown turned out to be a huge boon, as opposed to last year where I had to drive home, shower, and return only to hit traffic.

After a return to the breakfast buffet (yay free voucher), I was ready for the rest of the day. I had another game to run at 1, but it was at the same table as yesterday so that eliminated the need to spend time tracking it down. After a visit to the auction store while the mob flowed into the X Hall, I started at the opposite end of the X Hall and worked my way towards the middle.

Most of this was preliminary shopping, figuring Sunday would be the actual buying day as I had no events. As usual, there were the typical traffic jams and people that insisted on wearing a backpack the size of a Winnebago into a crowd. The X Hall really could use some more space to widen the aisles a couple of feet, plus some booths should have been set up so that throngs of shoppers didn’t stop in the aisle to look at their wares. Cheap gaming books booth, I’m looking at you.

This time around, I ended up with 5 of 6 showing up (Weasel eventually showed up to take the sixth slot). All 5 were experienced with Brass & Steel, and 4 of them gamed together. This group turned out to be more scrupulous in that they actually took the bad guys to the authorities as opposed to just mete out justice themselves. My dice were again vicious, almost killing a couple of characters and almost letting the big bad get away when they had him contained, which would have prompted another running battle. They seemed to have a good time and my inexperience with the system didn’t hamper things.

We got out of the game a bit before closing time for the X Hall, but there was a new wrinkle in the dinner equation. Friday there was a One Direction concert at Lucas Oil Stadium, just south of the ICC, so in addition to the gamers, you had hundreds of girls and their parents swarming into downtown.

We opted for the Tilted Kilt. Besides the obvious reason, I figured it was unlikely to be impacted by One Direction fans. Wrong! I wouldn’t have guessed mothers would take their daughters to a breastaurant for dinner, but we were surrounded. Fortunately, the management had planned ahead and put all hands on deck. One of the waitresses told us they have 15 servers on the floor, as opposed to the typical 4 on a Friday. I presume the kitchen was similarly staffed as our food arrived quickly.

After dinner we had a D&D game. It was an odd scenario. I chewed on some scenery, there was some great role-playing (especially the two senile mages) and then got killed off by one of my friends (what are friends for?). I confess, I didn’t put up much of a fight because I had been invited to join the Brass & Steel team on their annual Friday night revelry at a local establishment that featured their staff in costume, a costume contest, and nerd-themed drinks.

As closing time approached, the other guys were ready to call it a night. I had just ordered a drink, so I decided to stay around long enough to finish it off before heading back. That was almost an expensive decision. On the way, a man approached me, talking rapid-fire. I assumed he was a panhandler, having seen them around during Gen Con. I picked up the pace to try to brush him.

“You don’t need to be nervous, man.” When he said that I snapped into red alert. We were heading towards a bridge that offered nowhere to go once you were under it. I was certain he was going to try to mug/rob me and earlier Weasel had paid me for his half the hotel room in cash.

Just going toe-to-toe I might have been able to hold my own, but odds were he at least had a knife, so that was a losing proposition, fortunately I was aware of a bar across the street and headed for it.

“I know this place. It’s closing, come on back out.” Yeah right. If I had to, I would make a scene or call the cops from inside. The bartender told me it was too late for last call, I pointed my thumb at my shadow and said he was following me.

The bartender pointed me to a barstool then watched the guy lurk around outside until he gave up and headed back the way he came. Once he was a couple of blocks away, the bartender told me it was cool and which way the guy had gone. I bee-lined straight for the hotel and called it a night, thankful I hadn’t had a few more drinks.

I’d like to think that gaming over the years helped me keep a cool head and quickly assess the situation when I had a random encounter of the urban kind.