The biggest change that came with staying on site is that I didn’t lose a couple of hours to messing around at home and then trying to find a place to park. I was up early, hit the breakfast buffet (all-you-can-eat-bacon), and was ready for the con to open. I was running a game at 1, so I knew my time in the X Hall was going to be limited. 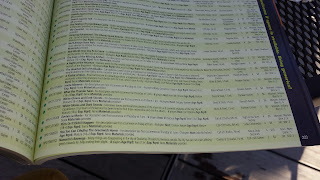 I swung over to GM HQ to turn in my regular badge as I now had my Gamemaster Badge (achievement unlocked). It took all of 30 seconds. Something I noticed this year was that the Gen Con team was very efficient. Weasel had reported the will call line stretched all the way down to Hall B (past the old exhibit hall) but only took 30 minutes. 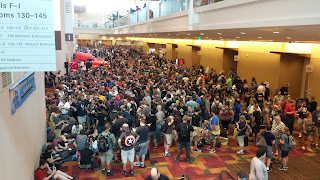 There was the usual mob scene at the entrances to the X Hall. I lurked on the balcony upstairs while the Gen Con folks went through their opening day ceremony, culminated with the assembled horde chanting “Do Not Run!” as they marched into the X Hall. I gave it several minutes before I went down to join the mob, giving them time to disperse from the entries.

There were no “want” items this year for me going in. None of the games I played or at least followed had new releases. I knew I wanted some spare dice for the game I was running that afternoon, but that was about it. I started my traditional search pattern beginning in Aisle 100 and working my way up and down the aisles, grumbling at extra-large booths that blocked the flow of traffic. At the first Chessex booth (Chessex and Crystal Castle booth have multiple booths – gamers love dice) I loaded up on standard d20s and picked up a new 30mm d20 to use as a GM die. 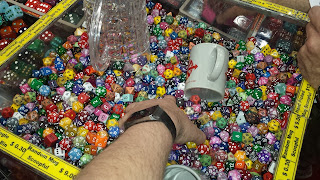 I made it about 2/3 of the way through the hall, stopping for the usual Gen Con reunions, people I know from somewhere else that I happen to bump into at Gen Con (and sometimes only at Gen Con). I headed off in search of my table, a process that would have been quicker if I looked at a map to begin with.

Four out of six players showed up, all brand new to the game system (Brass & Steel), for my first Gen Con game ever as a GM. This was a bit of a blessing in disguise, as the smaller group was easier to manage in combat, and combined with the efficiency of the core mechanic, things flowed smoothly. Despite my new dice trying to kill off the characters left and right, they made it through, taking the unscrupulous mercenary route as opposed to the much more involved doing-the-right-thing route. Everyone seemed to enjoy themselves, even when my dice foiled their brilliant plan, and an early wrap let us hit dinner before the X Hall closed, driving throngs on hungry gamers into the streets.

We had opted for Scotty’s, a Gen Con standard. The manager and the staff are always very enthusiastic about Gen Con, plus it’s fun to see the muggles wonder what the hell is going on. We took the first available table, which was outdoors. Since the weather was decent, and it gave a good vantage point for people watching, it seemed like a good idea.

The angry yellow orb in the sky convinced me otherwise. The sun was at just the right angle that the table umbrella was useless and the buildings across the street provided no shade. Plus we got lost between servers for a good ten minutes. But once they figured out someone was supposed to be waiting on us, it was all good. On the plus side, the live entertainment wasn’t so loud that you couldn’t hear each other. After, gamers want to talk, they don’t care about some local band.

After dinner and a bit of wandering, it was time to call it a night. The next day started with the Orc Stomp 5k at 6 a.m..