While Gen Con touts itself as the Best Four Days In Gaming and officially starts on Thursday, over the years more and more have spilled over into Wednesday, hence Day 0. One of my keystone events, the Stink, is on Wednesday night and I’m part of the group that puts it on. But the Stink wasn’t the first thing for me to deal with on Wednesday.

This year I did something that I haven’t done since attending Gen Con in Milwaukee – I stayed in a hotel for the duration of the con. That might seem crazy since I live within driving distance, but it made a big difference in my con experience. My roommate for the con, Weasel, and I had lucked into the last of the train cars in Crowne Plaza. For me it’s the perfect location, between the Exhibit Hall and Union Station. However, it wasn’t totally trouble free. 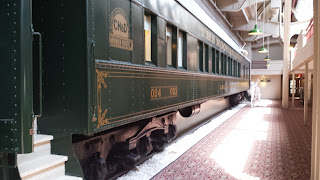 When I went to check in, my name wasn’t listed despite the fact that my card had been charged the first day as a deposit. However, Weasel’s name showed up (he was also on the reservation) in someone else’s room. And it turned out they had no way to cross-reference the confirmation number provided by the housing bureau or my method of payment with the reservation. There was lots of staring at screens and consulting with managers (meanwhile a clock is running in my head as I have a lot to do before the Stink) before they admitted that yes, I did have a room and they had somehow lost track of it in the system.

Key cards and free breakfast buffet vouchers in hand, we lugged our gear up to the room. I pretty much got my luggage in and hit the ground running. It would be later I would find out that housekeeping had neglected our bathroom, including something that I won’t detail here but merited another visit to the front desk.

Every year Gen Con provides swag for the Stink, trophies for our awards, and lends us the huge dice. One of my Wednesday games is “track down where the Stink stuff went”. Fortunately someone at my first stop knew where everything was and was able to direct me there in short order. A couple of trips with my dice-dolly (I bought this two-wheeled dolly just for Gen Con) and I was ready to move on to the next mission.

By this time, I had worked up a bit of a sweat because someone had forgotten to tell the ICC (Indianapolis Convention Center) to turn on the AC. The halls were almost as full of people as they would be when the con was open. There was the first whiff of gamer funk. But now it was time to go into the X Hall (Exhibit Hall) to collect donations from exhibitors.

Every year I do this, I liken going into the X Hall on Wednesday to peeking down the stairs Christmas Eve night, trying to figure out what the packages are by their size and shape. Well this year Christmas Eve was in a blast furnace. Between the loading docks being open, propane powered forklifts, and no air circulation, the X Hall was sweltering. The people working in there were troopers. After I made my rounds and collected donations from USAopoly (huge donors year after year – they are awesome), IDW Games, and Skirmish Sagin, I went back to the comparative coolness of the rest of the ICC.

Stink set up was a snap. The Mavens have been doing this for years, and we all have our parts down. Come show time, we were ready and had probably the largest Stink yet. I had been concerned because of the growing popularity of the Georgia Street beer garden and associated festivities, but the weather had been threatening and we were more family friendly – not to mention you could sit down. As usual, attendees fell into their ovine ways and stayed in line after the swag table. We kept trying to break them up because it was bogging down the swag line itself, but for the most part they preferred to remain in line to see where the line was going. 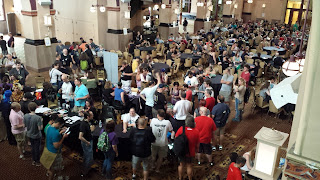 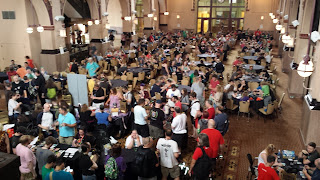 Weasel and I had decided to throw a room party seeing as our usual Gen Con Wednesday night activity wasn’t happening this year and it looked like the beer garden could get rained out. I slapped something together on Facebook from my phone, invited folks I thought might be interested, expected only a couple to show up, and Weasel made a beer run while I worked the rest of the Stink.

The Facebook response was more than we expected, so we beefed up the beer supply (this would turn out to be overkill – I still have Gen Con beer in my fridge). The train cars are very narrow, so capacity was a concern. It ended up we had enough people to fill the room without spilling out. I ended up having a cross-section of my gaming life, going from people I gamed with in high school to the authors of the game I was running this year. All in all, it was a pleasant little get together.