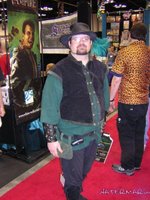 As per my GenCon tradition, on Saturday I wore my renfair garb. I arrived downtown and managed to find parking across the street from the Convention Center. On my way from the parking garage, a couple stopped me to ask if there was a play in town or something, because of all of the people that they were seeing in costume. I gave them the GenCon 101, proudly pointing out that GenCon is Indy’s largest convention.

Once inside, I headed for the Exhibition Hall. I wanted to pick up a copy of Gamers: The Movie and the X-Hall is the best place to show off when you’re in costume. I have to admit that I was a little disappointed that I only got my picture taken a couple of times that I know of. Yes, put me in costume and I become a bit of a ham… if I wanted to blend in I would have worn a black t-shirt.

I met Nicole at the Gamer Olympics, where gamers wielding boffer weapons battled the fighters of Edhellen Armoury. The Edhellen fighters were good sports as the gamers often failed to recognize when they had been “killed”, and the fighters were more interested in entertaining the crowd than winning. I also noticed that the female gamers were more… vicious when it came to their turn to fight. When the “barbarian” fighters were given a break and the “Romans” were brought in, it was tougher for the gamers because not only did the Romans fight well together, they had large tower shields that were hard to get past.

We checked in with Greg to see how he was faring in the Magic: The Gathering tournament. His custom deck that e had put a lot of planning and work into was trouncing the traditional internet decks that he had been facing, so he was at 2 wins, 0 losses, and 2 ties. We chatted until Greg’s next round was called up then headed to the Costume Contest early to get a decent seat. 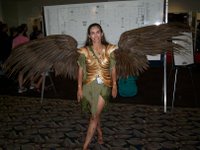 It was a good thing we went early. The place was packed and they ended up turning people away. We were crammed in and the room got warm and stuffy. Although there were some good costumes overall they weren’t as good as previous years. I really wish they would limit single person entries to a 60 second presentation and multiple person entries to 120 seconds. Anything longer than that should be in the talent category (and good luck there, the same step-dancing girls have won the talent category for 4 years straight). I was also disappointed that there was no professional category, which normally includes professional and previous winners. When I saw the Winged Elf that had won last year was back in costume, I figured she’d be back for this category.

We ended up leaving after Luke Ski finished, getting word from Greg that he had lost the following round to another unconventional deck. He could have remained in the tournament, but the loss would have kept him too low in the final standings to win anything. We met up with the game designers at their booth and made dinner plans, returning to Houlihan’s.

This visit didn’t go as well as the last one, as our server had six tables (including ours) dumped on her at once. I’m guessing someone called off. A lot of mistakes were made, but she was very apologetic and offered us free desserts plus she gave us 20% off our bill.

After dinner, we journeyed back to Nicole-Con. While I enjoy being in costume, it was nice to switch back to regular clothes. The game designers set up a session of their “baby”, a game called Battlestations. In a nutshell, take Star Fleet Battles, blow up the ship diagrams to map size, and have your characters run around in them. While there is more to it than that, it’s a quick and easy comparison at least 5 people will understand. 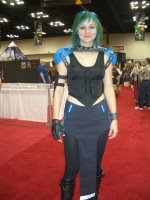 After Battlestations, Nicole, Other Jason (one of the game designers) and I set off to hit the Con after party at Radio Radio. We met our friend Jason, hence the game designer being dubbed Other Jason. It was a goth(ish) party, so I’m sure I stood out even with my black on black outfit, but at least I wasn’t the oldest one there. The band was Cruciform Injection. I really couldn’t tell you how they compare to other industrial/goth bands, but they were fun and put on a good show. And it didn’t hurt that the keyboard player (right) was cute. Evidently they are involved in gaming, as they were at GenCon and had a booth for the Obsidian RPG.

After the band, the DJ broke out a bunch of great dance music, mostly from the 80’s, which means I was a teenager when it was new. Believe it or not, I actually got on the dance floor and danced. Hopefully there’s no video. We met some people there that told us about the White Wolf party, so we decided to “crash” it. I’m not sure how much crashing was involved, as you just had to know it was there to get in.

Unfortunately, the address we were given turned out to be a parking lot. Fortunately, Nicole has a GPS in her car and managed to get the correct address. After a great deal of confusion’ laughter and people yelling into cell phones, they managed to guide me in. It turned out to be the same place as the 2004 party, which I had driven by every day on my way to the Con. We got inside and had time for one (free) drink before they closed the bars. Since drinks were free, they didn’t announce last call. But there was dancing to be done and people to watch.

The party spilled out into the alley outside the club, where an impromptu 10 vs. 10 game of Dodgeball had developed. Leave it to gamers to turn impromptu Dodgeball into something that requires a 20 minute conference over the rules. Other Jason played both rounds while the rest of us watched. The other team had an edge in the form of a very athletic guy that played in a Dodgeball League.

Did you know that there were Dodgeball Leagues?

Finally one of the staff came out and shooed us away. It was after 4am. It was a good thing that I didn’t have too much to drink.

(PS: Pictures courtesy of Google and the original photographers that I forgot to keep track of)

Blogspot is being a pain in the ass with links, adding in an extra chunk. Bear with me as I try to fix them... this is the second time I've written this blog entry, as the first time Firefox locked up and puked, losing it when I was almost finished.

Like I said, dude, Firefox sucks the sweat from a dead mans balls.

GenCon sounds like a blast. Alas, I doubt I'll see another unless as a writer. There is always hope.

Thanks for the kind words about the Gamer Olympics. We really have a great time putting on the show. Oh and by the way, tell Nicole her secret about "blue eyes" is safe with me.