The Soldier of Fortune flies again!

I try to sleep in because I know the LARP will run late. I'm still awake by 7ish and unable to fall back asleep. I putter around the house, making sure I have everything I need for my costume, trying to find my item card from Origins, and so forth. By the time I got downtown, I ended up parking by Union Station. I decided it was too hot to wear the coat and hat and left them in the car.


I hit the X-Hall in search of a pin for my collar. I didn't have anything particular in mind, but figured I could have found something. Unfortunately, pins have fallen out of style, so whereas in GenCons past there would have been many to cjhoose from, this year I struck out. I was also reminded that if you wear 2X or larger, buy your t-shirts the first day. By Day 2, they were sold out.

Nicole and I met up and tried again to find a game that fell in between all of our other events and hung out with Mike, another member of my regular game group. While she went to change into her Companion costume I spotted a gaming buddy from high school. As in 20+ years ago. We chatted and caught up. This is one of the great things about GenCon.

When Nicole returned, we went back into the X-Hall to visit the game designers. As we moved through the hall, Nicole was turning heads. Then as we passed a booth selling swords, on of the vendors came running out shouting "Hey lady!" He had a chainmail top that he asked Nicole to try on, then we walked to the Utilikilt booth at the other end of the aisle to borrow their mirror. 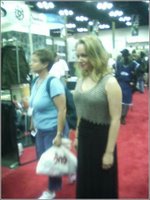 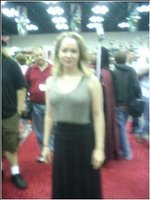 Whereas heads were turning before, traffic was stopping and cameras were coming out. I asked one photographer to e-mail pictures because I knew the ones taken with my camera phone would be crappy (and I was right). Even if that photog doesn't come through, there were other people taking pictures so there's always Google (I just found an image of me from GenCon 2004).

We met with Greg for an early dinner, then went to a screening of Gamers. It was a riot. I'm sure a lot of the humor would be lost on non-gamers, but it was hilariously politically incorrect.

Afterwards it was on to the LARP. It turns out my choice of parking was fortuitous as the LARP was being run in the Crown Victoria in Union Station. We met up with the other gaming friends that were also playing and coached them on character choices. Then the waiting began.

It was bad enough that the LARP, with 50+ players, had been assigned to a small room with 3 eight-person tables. And somehow the LARP staff had gotten locked out of their rooms because of something the GenCon staff didn't do. But they were disorganized. Did I mention the 50+ players?

Once the Harry Potter LARP broke up, we hijacked their rooms and the AC was cranked. But delays in getting people characters and gear booged things down. It was hard for people to role-play when they didn't know what their characters could do or what they had. Meanwhile we depleted the meager supply of ice left in the water dispenser and there was no nearby vending. One player, who must have been staying in the CV, had a supply of Guinness. Nicole charmed a Guinness out of him then shared it with me. Ahhh... cold Guinness.

Greg set up bar and went into RP overdrive. It kind of back fired on him when a young lady tried to charm some information out of him. Nicole pointed this out, saying that she thought "Kara" (a Kaylee clone) must of liked Greg by the way she was mounting the bar.

"That's not all she's mounting" I said when Kara went around the bar and climbed in Greg's lap. Nicole managed not to choke on her Guinness. A minute later a flustered Greg arrived at our table.

"There's a no-touching rule," he protested. "Why didn't they announce it? There's supposed to be a no touching rule."

I was less than sympathetic to his plight.

Finally after 11pm (the game stared at 8pm) everyone had characters and role-playing was in full swing. The usual plotting and scheming unfolded. At one point a "gun fight" broke out just outside of the room that was the saloon, trapping us inside. That was, until I improvised a back door. Some guy that was dressed like a cross between Wash and Kaylee, whom I dubbed "Washlee" must have been assigned to watch us as he became alarmed we were slipping out. Heheh.

The inevitable Reaver attack occured. We ran inside the closest room and promptly tipped over a table for cover. Jason, the captain of the Necessary Evil and a member of my gaming coterie, and I plotted our next move. Meanwhile the NPC-God-Ship arrived to steal everyone's thunder. Everyone was arguing about the Reavers and the Blue Sun medical clinic in the middle of town we had figured out was making new Reavers. Jason and his crew were also thinking about robbing the bank out of greed and boredom.

We manipulted another ship to do the dirty work of attacking the clinic, then debated with the various captains on how not to blow up all of the people, who would hide inside the buildings if the Reaver alarm was sounded. I came up with a simple plan... set a fire near the fuel depot and sound the evacuation alarm at the depot. Everyone would evacuate on some of the ships landed in town already or run out into the surrounding countryside.

As Jason and I walked back to our crews, I whispered, "and while everyone high tails it out of town, you go on and rob the bank."

Once the action started, things bogged down again as everyone waited for the one GM to resolve everything (I had enough time between our turns to walk Nicole to her car 4 blocks away and get back). A lot of our crews had been depleted as the clock advanced. Finally everything was wrapped up just before 3:30am.

I got home at 4am. But this wasn't my latest night out.

Jason and his crew were also thinking about robbing the bank out of greed and boredom.

OMGs! Jason is turning into Weasel!

Actually I was the one to put the bug in his ear about saving that money from being burned up.