Yes, I have tithed on the altar of the AC gods and have been rewarded. Fortunately, it wasn't as bad as I expected... though I kind of wish I made as much an hour as the repair service charges. But I shouldn't complain, instead of the motor or needing a new unit, it was just a part that the service had in their van. The repair tech didn't try to sell me on getting a new unit or bogus recharge on my refrigerant.

I'm conflicted over this review. I enjoyed this movie a great deal, but it felt really sloppy. Kind of like a big friendly dog that licks your face. It's fun playing with the dog, but you have to wipe off the slobber afterwards.

Let's start with the good:

Unlike many bladder-control-testing epics that have come out the past couple of years, this one didn't drag on 3+ hours. It didn't have any of the awkward lulls that the previous two had nor the clunker dialogue. Storm wasn't annoying, unlike the first two movies where she seemed to be there to wear a bad wig and cash a check.

Kelsey Grammer did a good job as the Beast. My only quip about the Beast in general was there were a few scenes he seemd too blue, but that was to keep from losing him against a dark background.

A lot of the background mutants from the last movie returned, giving us a sense of continuity.

The not so good:

Speaking of continuity... some of it is hard to get into without spoilers, but whoever was keeping track of continuity for the movie was asleep at the wheel. I'm not talking about continuity vs. the comics, because we know there will be differences (big differences). I'm talking about within the movie. Characters that get instantly from New York to San Francisco, scenes flipping from pre-sunset to pitch dark night.

There are a couple of twists. One I saw coming, the other I'm ashamed to say I didn't because in retrospect it was almost obvious. Make sure you stay all the way through the credits.

Now is the hard part... rating the big friendly dog. This movie will win no awards, but it is very entertaining... for me. If continuity had been tightened up and maybe a few things not rushed, this would have been an awesome movie. But since this is how much I liked the movie and not how much I think critics liked the movie, I'm giving it 3.5 angsty-mutant-flying-monkeys.
Read the rest!

My AC decided to roll over and die this weekend. Since it's Memorial Day weekend, that means waiting until Tuesday at the earliest. So I'm sweating and lamenting that it's in the mid 80's in my house. Nevermind what our ancestors went through, or what people in poor countries (or even poor people in this country) go through. I want my Freon, Patron God of Cool, to provide me with relief.

Tonight's game will be interesting. By interesting I mean a bunch of over-weight, middle-aged guys sitting around in a house with no AC. Can you say "ripe" boys and girls?
Read the rest!

I bought a new tv for my bedroom, a 26" HD LCD. I plan on putting it on top of my dresser, which means I'll have to clean it off. I also need to split my incoming cable there so I can access HD channels directly (my cable company doesn't block them, but you need a HD tuner).

Another Superman Returns trailer. Does it make me a total geek because I notice the use of pieces of the original score?
Read the rest!

There is a discussion below this comic that may help folks confused about the Net Neutrality issue.

Basicly, the government is trying to meddle in the net and allow isp providers to block or reroute your internet traffic.

Say your ISP is Evilnet (a spin-off of Starbucks), and you want to shop with my friend Shadowdragon. But MegaMart.com pays Evilnet to reroute traffic for all competitors in that product category to them, or at least make it a lot harder to get to competitors. Under what Congress is considering, that will be legal.

Here's one of my favorite online comics with another Net Neutrality strip.
Read the rest!

I find it ironic that when I go to the gym I'll see people going to lengths to get a parking space closer to the door. When I'm doing 2 miles on a treadmill, an extra 50' isn't going to make a difference.

Speaking of the gym... I'm able to fit comfortably in some of my old jeans (my yard jeans as I call them). Granted, I'm sure they're a bit stretched, but last year they were... uncomfortable (as I finding being able to breathe comforting). It's good that I'm seeing some payoff already as that will motivate me to continue.
Read the rest!

I was so sick of Tom Cruise that I really wanted this movie to suck. But once again, despite the fact that he's an over-popularized lunatic, he also is a good actor.

MI3 is the movie that should have started the franchise. Not because of where it falls chronologically, but because it's the best. That's not to say it'll win any Oscars, but it's a damned good hi-octane action flick. It has no pretenses of being anything else, and does what it's supposed to do well.

Besides Cruise, Ving Rhames is the only returning cast member, reprising his role as tech support and a touch of humor. On another casting note, I noticed that Cruise's movie wife looked a lot like Katie Holmes.

One thing I liked that is instead of trying to come up with a plausible but scary threat, the plot device of the movie is called the Rabbit's Foot. We never find out what it is, and we really don't need to know.

So if you want a popcorn laced adrenaline rush, go see MI:III.

4 out of 5 latex mask wearing flying monkeys.
Read the rest!

I tried to be as honest as I could and not skew the results... but Iceman?

And if I've posted this test before... Memory is *not* one of my super-powers.
Read the rest! 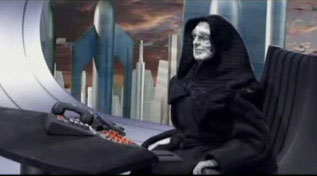 This clip is hilarious.
Read the rest!

I thought this set of PvP Online comics by Scott Kurtz were humorous and true. I only posted 1 panel, because I don't want to hog bandwidth by hot-linking (as if my dozen readers might crash his site) or just copy and paste them here. So go to here and here.

Now if you'll excuse me... I need to go to the bookstore.
Read the rest!

Blast from the past 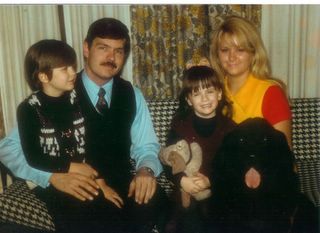 My sister found a slide and had this print made of it. It's her, my parents and I when I was roughly 6ish I think. It's kind of weird looking at this picture and realizing how much younger my dad is in it than I am now.
Read the rest!

Ozling would rather dress up as a pirate and ride his vampire sheep than do his job as my fitness coach, so I fired him and joined another gym. The MegaGym near my house wasn't as expensive as I thought, I get a discount on the enrollment because of work, and I decided to put some of my annual bonus to good use.

Now all I need to do is develop a crush on someone at the MegaGym so that I go there regularly. It's not stalking if I have a membership is it? Too bad the sales counselor that helped me probably won't be sticking around because she is going to get a job related to her degree... she was cute. Not like the "hot gym chick", just very cute.

She was probably surprised at what an easy sale I was, because she mentioned a couple of times how quiet I was. I had made up my mind that if membership fell below a certain price point then I was going to sign up. But if I told her that up front I wouldn't have gotten to spend half an hour with her giving me a tour of the place.
Read the rest!

This new trailer certainly makes me look forward to this movie. Then again... most trailers look good. Even Star Trek V had a promising trailer. But I think Superman Returns will be better. And by better, I mean not a stinking turd that even let down hardcore fans... because that's what ST5: The Search for God was.
Read the rest!

OK, this is genius. These guys got a bunch of people to dress in blue polos and khakis and all go into a Best Buy one after another. They had very specific instructions to be friendly and helpful, but if asked if they worked there to say no.

Of course, the managers flipped out and called the cops. But there really wasn't anything they could do because no one was doing anything wrong. Brilliant.
Read the rest!

Please tell me that the footage in this clip isn't polished. I like that they bring in the fastball special from the comics (the classic maneuver where Collosus would throw Wolverine at a target), but it just looks so damned cheesy here.

Of course, I'm still going to see it. But I'm not getting my hopes up too much.
Read the rest!