More on the RPG decline

A couple of MMO RPG developers make some interesting observations the tabletop RPG business woes here. Anyone interested in the gaming business should take a minute to read it.
Read the rest!

Yard work should be against my religion

I'm a druid, so plants should be sacred right? OK, I don't buy that either. But in addition to my innate laziness and disdain for rote physical activities, I'm allergic to trees and grass. Which means mowing the yard is loads of fun.

And by loads of fun, I means the standard hayfever symptoms, then within 30 - 60 minutes the shakes. As long as I don't break out in hives, all I have to do is wait it out.

They, as in the armed insects. I have an almost borderline phobia of anything with a stinger. So I try to mow before it warms up enough for those buzzing bastards to emerge and make yard work even more hellish.

I need to find out if the kid that did my yard a couple of years ago is still doing landscaping stuff. Now that I've bumped off a few bills, I could splurge a little.
Read the rest!

And that was the good news in the RPG business. This article shows a pretty dismal outlook of the RPG business all the way from publishers to game stores (between 5% to 20% closed down last year, which sadly is an improvement).

Many people have never heard of "The Secret Wars", a Marvel Comics cross-over series. If this video were real, these guys would rank write above geeks who write furrie fan-fiction.
Read the rest!

The reorganization at work worked out for me about as well as it could. My department is being split in half, with me keeping the half I want and the other half being given its own supervisor. I also get to keep my assistant and the other position that I was worried could be eliminated.

So my work load has been cut in half, positions I was worried about getting cut weren't and I get to do the stuff I enjoy most. That and my schedule has pretty much solidified to best case scenario for me.
Read the rest!

The reason Smallville is in Kansas

I wonder if this is the reason Smallville was set in Kansas?
Read the rest!

I hit a huge pothole today, and when I got out of the car, the hissing noise told me that it time to make another offering to the Car God. I went to the same place I got my tires... I don't know if tires have pothole warranties or what not, but I figured it would be worth a shot, and worst case scenario I'd be out the cost of 1 tire.

The impact bent and cracked my rim. The grand total was $440. That's what I get for thinking about buying an LCD tv for my bedroom with my tax refund.
Read the rest!

D & D in the headlines

Like it's Dungeons and Dragons' fault that this guy is a doofus. If they had argued over his collecting baseball cards, it wouldn't have made news.
Read the rest!

I find your lack of popcorn... disturbing 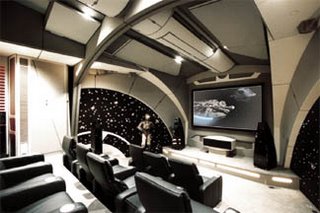 This is the kind of stuff I'd do if I won the lotto. It is just too damned geek cool. Check out the Death Star Home Theater.

update: It does have popcorn. And a wet bar. :)
Read the rest!

One of Chris Claremont's upcoming projects sounds interesting (despite the fact he is writing it). It asks the question: "What if the X-Men aged in real time?" Of course, I'm a big fan of what if stuff, but I haven't been a big fan of most of Claremont's stuff since he came back to X-Men several years ago.

The original X-Men will be in their 40's, the New Mutants in their 30's, and folks like Xavier and Magneto... about as old as the actors that play them in the movies.

In a related note, this series is delayed because Claremont collapsed from exhaustion and will be taking a break. I think he needs to take a nice long break to recover, and then not stress himself, so he shouldn't work on any book besides this new "GeNext". He definately should not add the stress of ruining, I mean taking over Exiles, a book I enjoy.
Read the rest!

I have to admit that when I saw the previews for this movie, I was disappointed to see Nathan Fillon (Capt. Mal Reynolds from Firefly/Serenity) was in it, because it must mean that he is hard up for work.

After seeing a couple of positive reviews roll in, both of which compare Fillon to Harrison Ford, I decided to support a Firefly veteran and go see Slither.

Make no mistake, this is a B Horror movie. But it knows it and has no delusions otherwise. However, it's a damned witty B Horror movie. Fans of Fillon will not be disappointed (I wonder if the writer intentionally made Sheriff Pardy similar to Mal Reynolds).

This movie is not for the squeamish. There's a more than a fair amount of gore and the slithering slugs that like to go down people's throats to take them over. And bodies... lots of bodies. One thing I did notice though was that the director passed up on the hallmark of many bad horror movies. There's no nudity, gratuitous or otherwise, despite multiple opportunities. I find it a measure of intelligence on the director's part not throwing in some T&A... the movie doesn't need it and it would just lower it to the Friday the 13th level.

So go support a Firefly vet, see this movie. Just not right after lunch or dinner. Or right before.