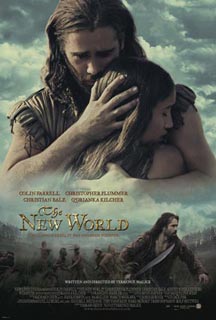 I'll start off by saying The New World was a gorgeous movie. I'm sure it will at least get nominated for several visual categories for the Oscars (though I don't think it's eligible until next year). This film is more like a piece of art rather than a movie. That is it's greatest asset, and it's biggest flaw.

The story is conveyed by images and voice-overs more than action, much more so. If I wasn't enraptured by the imagery, I would have probably been lamenting how things seemed to drag. This is why The New World will probably end up doing poorly at the box office. Most folks aren't that patient, regardless of how pretty the film.

My only other qualms were some of the edits made things confusing, and James Horner's score was a little uneven. The score would go from "classical" pieces to interludes that could have been lifted staright out of Braveheart.

The acting was great. You could see that Collin Farrell as John Smith was practically ashamed of himself as he fell in love with Pocahantas (and he should have been), while Q'orianka Kilcher steals the movie (I'm also impressed that she actually speaks Algonquin now, having learned the language for the movie).

The movie also managed to avoid a lot of cliches it could have fell into. If you like history pieces, this is a good movie for you also. While it's not 100%, it also doesn't over-romanticize the period.

Overall, I give it 4 of 5 buckskin wearing Native-American flying monkees.