The 5 steps of WoW

An apt comic that applies to any MMORPG.

If I get around to it.

I had originally planned on going up to Chicago to the Field Museum today, but since I'm driving up their Chicago and I have stuff planned out for every other day of my vacation I decided to be lazy today and goof off. Besides, it would be more fun if I can find someone to go with me (though I doubt that I'll find someone else interested in archeology and paleontology like I am).

So nothing to do today. I could clean the garage I suppose. Yeah, right, that'll happen.
Read the rest!

The Schiavo case is really getting on my nerves, specifically the political theatrics going on around it. Members of Congress are rushing back from recess to grandstand for some publicity and interfere in a matter that the courts have already ruled on and the Supreme Court has refused to overturn. Congress can go on vacation while hundreds die in Iraq, but give them an opportunity to get some time on the right-wing propoganda wagon and they come scurrying back for their special session.

I am a firm believer in a person's right to die, and this case especially interests me from a religious standpoint, and I'm amazed at all these fundies blathering on about keeping her alive. She's been a vegetable for 15 years... the best case scenario is that her soul has already moved on and all the is left is the physical shell. The worst case scenario is that they are keeping her soul trapped in her body by not allowing her to pass on. Even Christians should be able to see that.

And for the record, if I am ever in such a state, please let me die.
Read the rest!

Yesterday was kind of wierd. It was my last day at my old store, and while most folks who know how much fun that place has been for me, I will miss a lot of the people I worked with. It really didn't seem real until the last couple of hours, at which point I just wanted to get out of there.

Afterwards, some of the crew and I got together at the Ale. I bought pizza, and I got bought a lot of beer. But next time I plan a going away party, I'll have to remember not to do it on St. Patrick's Day and the first day of NCAA March Madness, as the place was packed.
Read the rest!

A friend from my SWG guild has the large version of the trailer. You'll probably have to right-click and "Save Target As" since my Quicktime had fits and I had to use Real Player to play it.

Having seen the trailers, I really want to see this movie. The fact that it has Jessica Alba writhing around in leather is purely coincidental ;).

Seriously, I tend to appreciate visually off-beat movies, Frank Miller wrote some of my favorite comic stories and Robert Rodriguez directed on of my favorite movies, and the cast looks very promising.

Besides, a movie has to have more than a hot actress in skin-tight leather... I never did see Catwoman and by all accounts I'm glad. I could tape a picture of Halle Berry above my cats' litterbox and get the same effect.

But Sin City looks good. Alba in leather is just a bonus :).

From the comic Boondocks...

Well, they settled on my new work assignment. I'll be going back to the store that I started at on the East Side until Noblesville starts. I guess its not too bad... I still know a couple of people there and the drive is 20 minutes or so. And the branch of the Comic Carnival that I go to is in the same strip mall, so it'll save me an hour on my days off.

Hopefully with me getting off so early I'll get back to going to the gym more often... I figure I can get home, go to the gym, and be back by 5:30. That and no longer having that hour long lunch will help me cut down on pigging out on fast food. No wonder I've put on 40 lbs. since I've been a manager.
Read the rest!

It figures... out of three alien predators with shoulder mounted blasters, all three catastrophically fumble. The last of the three had a toy the first two didn't... a monofilament whip that might discourage players from going into melee (where most of the players are the most effective).

It did 2d6, with no Strength bonus to damage, which was a bit of a sacrifice considering this alien predator had a +5 bonus from its Strength and an additional +2 due to class abilities. But every hit forced a Fortitude Save DC15. Nothing makes players sweat like melee weapons that force saves. If the save failed, the target took double damage (4d6). If the attack provoked a MAS (massive damamge, greater than the character's Constitution) check, the the save for that was a fail, the character lost a limb.

Even after that, the group's doctor had a better than even chance of reattaching the limb sufficiently to keep it viable until they reached a proper facility (this is the Firefly 'verse, where medical technology is sufficient to replace someone's internal organs with engineered designer organs with no ill effects ["The Message"]).

One PC and one NPC currently need help to applaud. The doctor failed on both of them, so now I may have to actually flesh out cybernetic rules. I'd hate to see what would have happened if my players hadn't played as smart as they did, given how treacherous the dice were being that evening.

The moral of the story: don't rely on the dice. Unlike a smiling GM, they give no warning.
Read the rest! 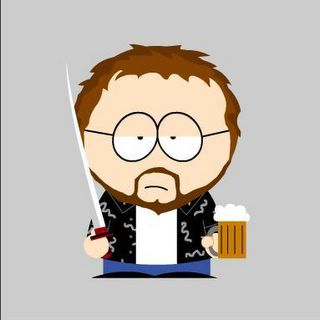 To make your own South Park characters, go here.
Read the rest!