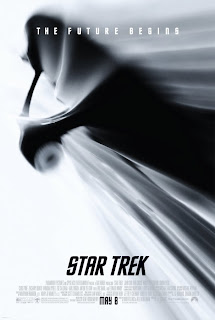 Star Trek is a movie that both I and my friend Marik looked forward to seeing. We are both long-time fans who have been disappointed as the franchise sputtered out. When it was announced that the next movie was going to be a reboot instead of trying to milk another story out of the aging cast of TNG, a lot of Trekkies lost their shit. Then again, these were probably the same basement dwellers that freaked out over making Starbuck a woman.

Personally, I was ready to give JJ Abrams a chance. While I didn't watch Lost, I'd heard enough good things about it and liked his work making Cloverfield to think he could do a good job with Trek. What some purists didn't get was that the choice was reboot the franchise or let it fade into the sunset. And rebooting meant change.

Marik:
I read a lot of reviews before going to the newest Star Trek offering. This newest incarnation is offered by acclaimed director JJ Abrams who’s brought us such offerings as Lost, a personal favorite series of mine Fringe, and movies Mission Impossible and Cloverfied. Abrams rarely misfires and when I heard he was doing the newest attempt to breath life into the Trek franchise I sat up and took notice. When reading all those reviews, I ran them through the standard SF Haters filter I use whenever the mainstream media reviews a movie and was further impressed. So when I got a chance to jet back to Kentucky and catch a late show with my family, I didn’t pass the chance. As the movie started to play out on the screen, I quickly realized this was more than an attempt to ‘breath life’ into Trek, it was also not anything as simple as a ‘reimagining’ that many have dubbed it. This is nothing short of a wipe the slate clean, add cool slickness, and mass appeal to something that was all but on life support. Let’s admit it, we all have a few dozen favorite episodes of one or another Trek series, and maybe a favorite movie or two, but I’m somewhat an unbiased opinion. I followed TNG from beginning to somewhat disappointing end, watched two seasons of DS9 before it got stale and formulaic, never caught on with Voyager (until I could watch them back to back, lately watched the whole series and found it better than I expected), and then watched Enterprise with glee. Here in the Scott Bakula staring series was a chance to bring Trek back to life, and instead old school Trek producers slapped on some spackle and tried to tinker around the edges with Cannon and maybe interest a few new fans. Sad really, because it was some damn good writing in places. The two part episodes Through a Mirror Darkly comes close to being the best Trek TV episodes ever, right along with Mirror Mirror (ST:Tos), and Yesterdays Enterprise (ST:TNG). As for the earlier movies, ST : The wrath of Khan was good and Voyage Home was amusing. The rest basically sucked in various levels from dust buster to industrial strength hoover.

It's obvious that Abrams has a great deal of respect for the source material and the fans. This movie is much more like Batman Begins or Casino Royale than Battlestar Galactica. However, unlike all of those reboots, it doesn't ignore four decades of stories, but it does it without becoming shackled and burdened by it either.

There are a lot of small touches and sly winks to fans to make them feel welcome in this new Trek. But I think more importantly than that, the heart of the movie evokes what was best about Trek. It's hard to say more on that point without crossing the neutral zone into spoiler territory, but a Spock line says it best: "I always have been, and always shall be your friend."


Marik:
JJ Abrams takes a tact I would never have expected from the Paramount. No matter how badly they’ve jacked with the history lines of Trek, they always seem to loose their nerve at the last second and go “ha ha, just kidding!” and fix it all in the end. Any serious Trek follower knows what I’m talking about. It is not easy to total up all the times the Trek universe has been jacked up, and then repaired by the end of the episode. ST:TOS started it with the episode City at the Edge of Forever, and the Guardian of Forever who let the crew of the enterprise basically wipe their entire time line from history, then fix it. Common plot line. This new movie had me constantly going; “okay, okay, when’s it going to happen?” The answer is never. I was stunned speechless, and I don’t mean in a bad way. What they did to Trek was nothing short of a master stroke that is liable to be a resurrection of monumental proportions.

The movie itself is well paced, and the effect outstanding. I saw it in digital (a hard drive, no film), and loved it. The casting was superb as well, my only complaint being Anton Yelchin as Chekov. He’s genuinely Russian born, which is nice, but his looks just don’t seem to fit. Stand outs are Zachary Quinto as Spock (took a few minutes to get used to that Sylar as Spock, but it works), John Cho as Sulu (awesome folding Katana scene!), and Simon Pegg as Scotty. And Pegg is awesome, capturing the late Doohan beautifully. Karl Urban as Bones deserves honorable mention too, very funny. Chris Pine as Kirk is okay. I think he’ll take a movie or two for him to grow into this one, but he was acceptable.

I've seen it twice, once on IMAX. And yes, the visuals are worth it. On it's own, Star Trek is a solid action movie that will appeal to the uninitiated. It deservedly broke the records for midnight showings and IMAX openings and hopefully the box office results will mean that Paramount will continue the franchise.

The cast is very solid and worked very hard to invoke their "originals". Chris Pine's Kirk may have been a touch over the top with the ladies' man routine and Chekov's accent bordered on a speech impediment (nuclear wessels). Zachary Quinto made a great Spock and Karl Urban *was* Bones, probably doing the best of the cast at recreating the original character. It was also nice to see Uhura get to do more than answer the phone. Simon Pegg's Scotty was mostly comic relief, his character probably straying most from the original, though to be fair that was mostly due to writing than his portrayal.

Marik:
t’s the kind of movie that leaves you talking. As a Trek-virgin, you’ll probably love the visuals and a story that isn’t so full of Trekish junk that you’re left scratching your head (expect “Red Matter”, WTF?, and transwarp transporting someone on a moving ship lightyears away without even know where the ship is!). As a Trek fan you’ll probably love it for the faithfulness. In some ways it’s more faithful that the TV series Enterprise was, including the old TOS phaser sounds from the bridge, “whoosh” as doors open, and a cool retro looking transporter effect. At one point Chekov runs down to the transporter room to manually target someone to be beamed aboard. Not nearly as woosh-bang as the TNG era, and well done. My wife and I, both long time fans, literally spent an hour or so at breakfast the next day just talking about the implications of this new movie. Something I don’t remember doing in years about any flick. Even my soon to be eleven year old was deeply engaged. I saw more than one person leaving in tears, they were so overwhelmed.

As a fan of the TV series, I have only one complaint. How dare they do that to Porthos! That was completely uncalled for. I was not the only fan crying fowl after the movie!

Despite all of my praise, the movie wasn't perfect, and the problems fall on the shoulders of the writers. Some of the issues I had would probably not be noticed by non-Trekkies. The reason Kirk ends up on the ice planet we see in the previews is too contrived and merely serves to bring a couple of the characters into the story and provide us with a CGI monster chase scene. The whole transwarp beaming mechanic had me going "no, wait, that doesn't make sense", but to an average movie goer they'll just accept that the transporters are magic and not notice. And once again major Federation planets have no defenses and in fact don't notice that a giant mining ship is boring into the planet's crust.

There are other inconsistencies, such as during the attack on the Kelvin it's announced that the weapons are off-line and the next scene shows them blazing away. In fact the off-line weapons pick out torpedoes in flight with no one at the controls later. If it's a crisis why are they taking the time to shuttle up instead of beaming? (The answer is so we can get a beauty shot of the Enterprise). And whomever designed the Federation ships looks like they were given a selection basic parts and told to go to town. And what was up with the anime-eyed nurse? Couldn't they have made her a bumpy-head without using the distracting fake-looking CGI?

But a lot of these are quibbles.

Marik:
Anyway, that’s probably more than enough. 4.9 out of a possible 5 phaser wielding, folding katana carrying falcons on this one. If you don’t see it, you’re crazy.

I'm a little less generous, mostly for the sloppily contrived writing in a couple of spots. But overall it's a great flick and definitely worth seeing on the big screen. I give it 4 of 5 pointy-eared time-travelling flying monkeys.

Wow, I can't believe I'm the first to post a comment! I found that O'Hura was simply used as eye candy and a bit of sex appeal for Spock. She did serve to illustrate his struggle with emotion, but that's about all she got to do. Big deal, she verified that the info Kirk had was true. Not a real part, if you ask me.
Also, I didn't think Kirk was overboard on the womanizer thing, he's supposed to be what? 25? maybe? Weren't we all driven by sex at that age? Hormones rule until you are about 35, sometimes longer. It fit with his "later, original series" persona to be a total whore-dog here. Spock was great, as were Sulu, Scotty and Checkov (though his accent *was* a bit strong). Bones, however, took the cake! And I totally loved it that Nimoy got to play a valuable cameo part, not just show up in the background for a second.