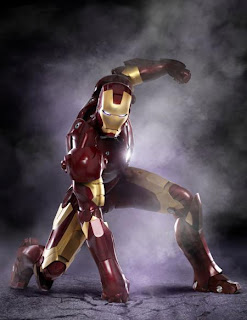 Iron Man's conversion to the big screen is the best adaptation of a Marvel Comic character since Spider-Man. I already had high hopes for the movie based on glimpses of Robert Downey Jr.'s performance as scotch swilling playboy genius billionaire Tony Stark.

The story does its job with plenty of comic book fan service. While it's no Lord of The Rings, it doesn't need to be. While it may not win any Oscars, the script keeps things moving without too many clunker lines or plot holes (but there are a couple).

The effects were good, too the point that my biggest problem with the Mark I suit was that it had no eye protection. I kept thinking "what if he catches a bunch of shrapnel in the face... or why doesn't someone think to shoot at the eyeholes", not "fake... it's all CGI... faaake>"

And Gwyneth Paltrow as a redhead... me gusta mucho!

Make sure you stay until the end of the credits if you are a comic book fan. While it may be lost on non-readers, I literally blurted out something along the lines of "effing A".