Movie review: Harry Potter and the Order of the Phoenix 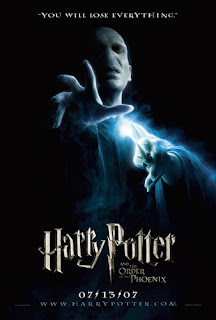 Turning the 800 page behemoth that is J.K. Rowling's fifth Potter book into a non-Peter Jackson movie had to be a daunting task. How much can you cut out and still have a story that doesn't require an intermission? Well it turns out quite a bit.

Before you think I'm a book fan grousing because some obscure subplot was left out, Phoenix is in my opinion the best of the Potter movies so far. Probably just like the books it has taken on a darker tone than the previous Potter tales.


It probably helped that it has been quite a while since I've read the book, and I wasn't about to read it again. Not that I didn't like the book, but it was looong. The challenge for director David Yates was to distill it down without cutting too much. I think that he successfully walked that tightrope. Omissions I noted were because I had read the book, not because it left a big plot hole.

While the movie was enjoyable, it wasn't perfect. In a couple of places the effects didn't live up to the usual standard for Potter movies, and it wouldn't have hurt to have an extra 15 minutes to fully set up or tie up certain things.

As I mentioned, the story is darker, making this movie more of an Empire Strikes Back (though not literally, unlike Pirates 2)... a well crafted story but not very cheerful.

I also miss John William's score. I don't know why he stopped working on Potter movies, but it's a shame. Nothing against the current composer, he's just no John Williams and this is the kind of movie Williams would have done right.

Another PG13 movie full of kids. At least one child will probably be having nightmares from what I saw. I can understand thinking "oh, it's Harry Potter, it's for kids." But it's one thing to read it and another to see it on the screen. But I'll save the rest of my PG13 rant for when I get around to reviewing the last Die Hard movie.

Overall, 4.5 out of 5 wizarding flying monkeys.

Dang it, you're too fast. I was going to see if you wanted to go see this.

Saw it the day/night it came out. Not my personal favorite, by any means, but I understand that it is a filler movie and has to be there. Felt the same way about 4-6 of Star Wars.

The NPR movie reviewer said that Harry was so angry in his gray hoodie in the movie that he expected him to bust out rapping at any moment...I can see that...

Since I haven't read any of the books I can't be labeled as a whiney book purist. However, even in the movie there were a lot of unanswered questions that made me wonder if they ran out of time or money or both. Plus some unanswered questions from previous movies (Prisoner Of Azkaban specifically) that haven't been dealt with yet.

Wasn't horrible enough to make me not want to see the next one. It peaked my curiousity enough. But I hope the next one is kick-ass and leaves everyone salivating for the finale....