Went to the Indy Irish Fest on Saturday and had a good time. In addition to seeing Gaelic Storm (who appear to have another new fiddler... though this one looks to be another cute brunette like the one they had when I saw them in Chicago), I saw a new (to me) band, Searson. Of course, two good looking redhead fiddlers did nothing to get my attention. :) 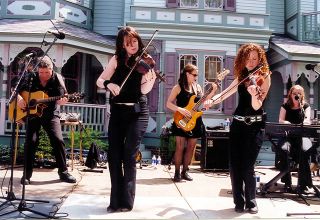 The After Festival Party at the Hilton was a bit of a let down. I was expecting a bunch of drinking and Celtic musicians jamming together. By the time I left at midnight, there was one bartender, 20 people, and no music. And here I was proud of myself for going out on my own and doing something that involved hanging out with a bunch of people I didn't know.