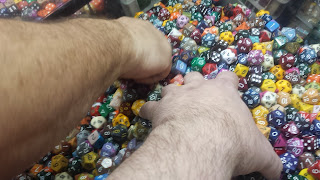 After dinner, I checked into my hotel. We did some walking around downtown and visited the WotC Tyranny of Dragons release party. I was underwhelmed. My friends took off, so I hung around the beer garden a bit, running into various people I knew. I got to try the Sun King Gen Con beer, but that was it. They ran out, so I settled for a Wee Mac and found more people I knew. A friend led me over to Tiki Bob's where some Gen Con folks were having a get togther, but the 4:30 a.m. soon caught up to me, so I called it an early night.
Read the rest! 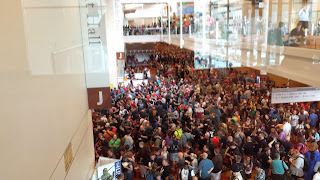 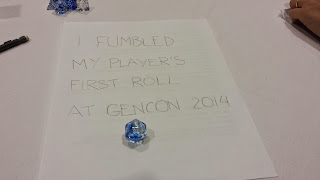 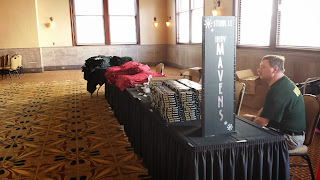 Every year my friend @Knharter plays host to some out-of-town friends and Wednesday night has a get together that has been dubbed N-Con. So after the Stink I bee-line it there. There's always an opportunity to game, especially since some of the folks are game designers, or like this year I just socialized. But after a couple of hours I headed some so I could be up bright and early for Day 1.
Read the rest!

Yup, that's Day -1, as in Tuesday (since I consider Wednesday Day 0). I was downtown on an errand and parked across from the ICC, so I decided to pop in and check things out. I walked by a reporter from a local news channel setting up to do a spot and joked that he was a day or two too early. We started talking about Gen Con and Wednesday events like the Beer Tapping and the Stink and he asked to interview me. A whole 5 seconds actually made the broadcast! I saw that @nellybellexox had put out an open invitation to lunch at Scotty's via Facebook. Since I was already downtown, I decided to take the opportunity to hang out with gamers pre-Gen Con. I chatted with the manager of Scotty's while I waited for people to arrive and we talked about how Tuesday had become the new Wednesday as folks were arriving earlier and now events were happening on Wednesday. This turned out to be kind of a gamer's UN as there were gamers from Ireland, Australia and Canada in addition to various parts of the country.

The pic was blurry because I snapped in in a hurry trying to hold the camera as much in the corner of the room as possible. Now it's time to make sure all of most costume stuff is laundered and ready, which may require some archeology.
Read the rest!