Costume for the day - my ren faire outfit. I got my first picture request shortly after entering the hall. I don't get a lot of them in this outfit, but a few, and it fuels my ego. The only planned event on the agenda is a Pathfinder game later that night. I returned to the X Hall and visited Randy Milholland of Something Positive a dark humor nerd-centric comic. He gave me a free sketch and I purchased a couple of pieces of his original artwork from the comic. I mentioned how a couple of terms from his comic had made their way into my gaming group's parlance and asked about his dismembering Wil Wheaton in his comic. As a side note, it looks like Randy had a good time at Gen Con. I met up with Nicole and as we walked the hall we swung by the autograph area. Nicole is not only a fan of Wil Wheaton, but also his wife. The line looked short, so I suggested we jump in line to get autographs. I'm not a big fan of the whole pay for an autograph thing, but Wil stays involved in the geek community so I thought of it as a way to show appreciation and encourage him and his fellow geek-celebs to come to Gen Con. There were tables for Wheaton, Nichelle Nichols and Wes Bentley ( the ringmaster with the funny beard in Hunger Games). The line was only 15-20 people long, so I figured divided among three tables it would be super quick. Then an employee came along the line. "Are you here for Nichelle or Wes?" "Are you here for Nichelle or Wes?" "Anyone here for Nichelle or Wes?" When they received a response, that person was able to go right up because everyone else was there for Wil Wheaton (probably because he is better known in gaming circles). Nicole and I got to the front and went up to pick out the picture for him to autograph. I pointed out that both Nicole and and Wil were homebrewers, which got a conversation going (and led to our first reminder they had to keep the line moving). He struck me as the kind of guy that would be fun to hang out with and drink some good beer while playing a game. He seemed tickled that Nicole was also a big fan of his wife and suggested a website. I think that was when we got our second reminder. 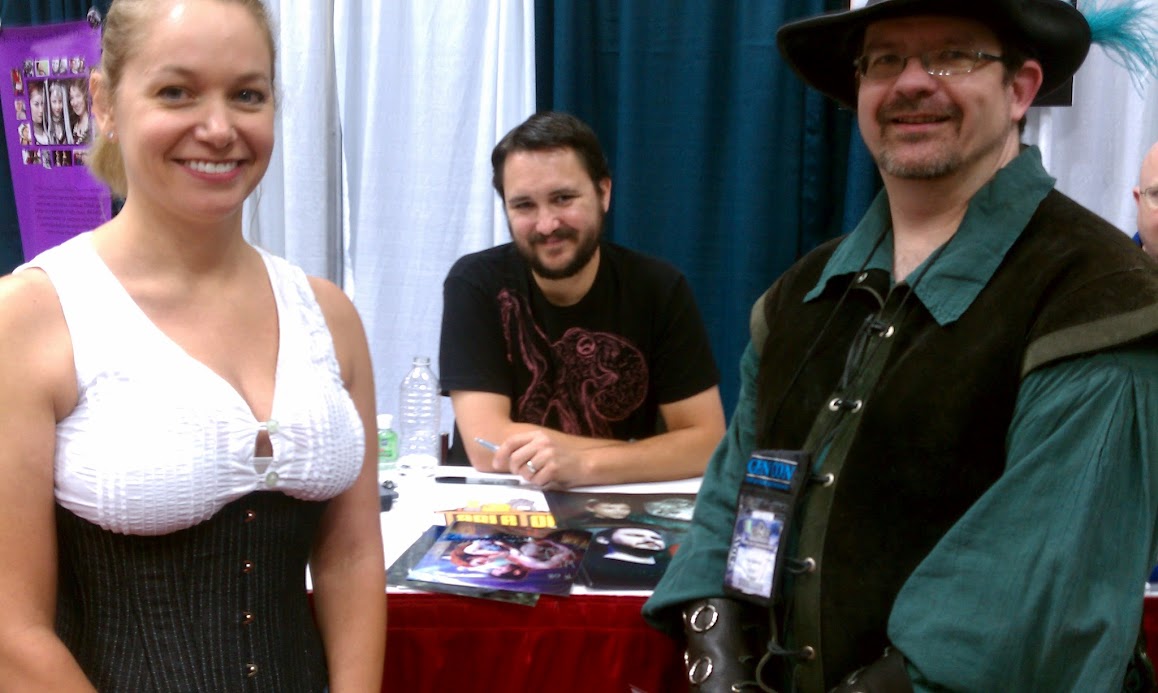 An employee used our phones to snap pictures. Then we started another conversation that got us are final reminder there were other people waiting. My friend @foxyfolklorist told me that her troupe, Different Drummer Belly Dancers (@ddbd)was performing in the Klingon Opera Ballet. I decided it might be fun (come on, belly dancers with bat'lehs are worth serious geek points). I enjoyed it, especially hearing a Klingon rendition of Bear McCreary's arrangement of Along The Watch Tower. Klingons singing the Ewok song from the end of Return of the Jedi was rather surreal. The Pathfinder game was Sabrina and the Seven Dwarves. The evil demon behind Starbux had stolen all of the coffee, putting clan matron Grumpy out of business, so we were setting off to reclaim the magic of coffee. In retrospect, we should have started with someone playing the fighter or the barbarian. I began play with Dopey, a dwarven druid pothead. As Peter Jackson has established that dwarves have Scottish brogues, I affected a stoner Scots brogue as I hammed things up, much to the amusement of the GM. Sadly, Dopey died fighting the espresso-machine dragon, so I re-entered play with Bash the barbarian, a dwarf raised by hilljacks. So now I had a redneck Scots brogue.

Bash also finished off the demon, after felling several caffeine fiends then getting stuck by a Hold Person spell. I went home to rest up for the big day, Saturday.