Trying to live blog Gen Con would be an exercise in futility, so each year I try to recap my experiences shortly after the con. As is traditional, the focus on Wednesday is the Stink then N-Con. The Stink started as a get together that started as a meet-up for people on the Gen Con Forums and has since ballooned into 400 ticket event that helps kick off the convention. 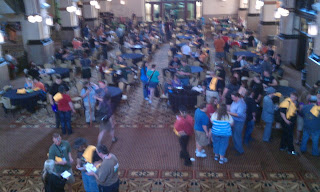 Once again we were in the Union Station Grand Hall. For some reason Gen Con also stuck a boffer fighting event in the room, but it didn't to turn out to be as much trouble as I feared. I arrived a few hours early to scout things out which gave me an excuse to roam the ICC (Indy Convention Center) and take in the early Gen Con atmosphere. Unfortunately a glitch this year meant our swag solicitation to exhibitors went out way too late, so I didn't have an excuse to get into the Exhibit Hall early. After collecting the swag that Gen Con itself provided, I headed back to Union Station for set-up. I was concerned that we were light on swag, but the gaming groups that had tables at the Stink also brought swag. The Stink went smoothly, with my only concern being the huge line that started at the t-shirt table I manned and went on past the various gamer group tables. Gamers at Gen Con instinctively form lines. We'll have to brainstorm about our room layout for next year to see if there is a practical way to solve it. In years past, Starwind Design had provided bags for the first 100 attendees. This year, they donated t-shirts but we had a different mechanic to give them away. The first 100 people and the winners of various games and prizes received special tokens. Towards the end, we called the token holders up to receive their t-shirts, thus rewarding people that didn't dash in, grab swag and split. After returning the Nordic Distance Dice to the Convention HQ, I headed to N-Con, a night-before-GenCon get together hosted by my friend @knharter. She usually has a few game designers staying with her for the convention, so we get to try and play games with the folks that created them.