The big event for Saturday was the Steampunk LARP in the evening. That left me a lot of time to kill during the day. I was lucky enough to be able to check into my hotel early, then headed over to the Exhibitor Hall. It seems like no matter how many times I walk the XHall, I find something new.

I met up with Nicole for a bit, who was also in costume for the LARP. We had our pictures taken a few times, though I don't think it was for my dashing bowler. :) 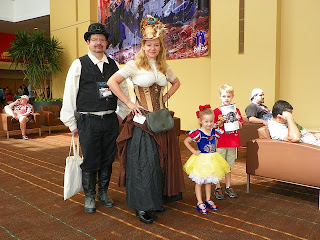 Normally on Saturdays I take in the costume contest, which eats up a huge chunk of the afternoon between the actual event and the long time spent waiting in line. This year going to the contest would have left me no time to eat before the LARP (and it turned out the contest ran long). Other than taking a few minutes to watch the pre-contest parade, I found myself with a few hours to kill and wandered the Con.

The LARP itself was a hoot. It was the best run LARP I've played in, the players were all great, and it actually had a set. Who knew playing a Steampunk Amish Mushroom Expert could be some much fun (even if my Amish accent devolved into full-blown German)?

In previous years Saturday night was dominated by the White Wolf Party. This year White Wolf opted to have a small suite party that was invitation only. Needless to say, I'm not cool enough to merit an invite. My friend Jason and I decided to check out some of the post-parties running downtown. We'd seen advertisements for a couple of them, and after hitting the House for a beer headed out.

It's always funny to see the reactions of "muggles" to Gen Con attendees in costume roaming the streets. Jason and I both still in costume from the LARP, and at one point ran into a couple of other players that had been in the same LARP. Our conversation drew a lot of curious looks from the downtown regulars.

We recognized several people from previous White Wolf Parties at the Ugly Monkey. We debated whether the $10 cover charge would be worthwhile, decided to give it a go, and left within an hour.

We returned to the Blu Lounge (it was almost empty during our first stop) since there was no cover charge for anyone in costume. At the door, some gangsta wannabe was being refused admittance over dress code. Jason and I were waved in past him.

The crowd had picked up and we ran into one the the GMs from the LARP and a lovely young lady who was a regular at the club and had attended previous Gen Cons. Fortunately there is no video when she, with the help of a few beers, got us on the dance floor.

I ended the night with the long walk back to my hotel, the JW Marriot. I think next year I'll pick one that is more centrally located.