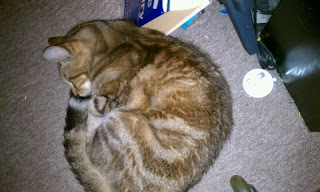 Rest in peace, Ryoga. I'll see you again someday in the Summerlands.

(more after the jump... there may be tears)

In the early hours of last Sunday, Ryoga became sick. I knew something was wrong when he wouldn't stop being sick. At first I resolved to sleeping on the couch, that way I could close off any part of the house with carpeting but still be with him. I was already fearing the worse, and had resolved not to leave him locked in a bathroom possibly to die alone if that was the case. But I was still hoping he was just sick and it would pass.

Within the hour, he looked miserable and sounded worse. Instead of being by my side as he had almost constantly been the past many years, he was hiding. I collected him and went to the emergency vet, crying and apologizing the whole way. I knew our time left was short.

While the vet examined him I clung to the hope that it wasn't the end, it would be something treatable, we could go home and he'd curl up in my lap as he'd always done.

It wasn't. We wouldn't. My last moments with him were approaching, to be spent in that cold, sterile room.

I listened as the vet explained. I knew that no matter how much money I threw at it, it would only be postponing the inevitable and dragging out the suffering, probably ending with him dying alone while I was at work or asleep. I couldn't do that to him just because I wasn't ready to say goodbye.

I told my vet my decision. They took him away to prep him, then brought him back so I could say goodbye. He almost seemed normal when I scratched him under his chin and my will almost crumbled. But I thought about what I'd have to put him through to buy a few weeks, and maybe only a few hours. I knocked on the door, signaling I was ready.

I stroked him, sobbing my farewell, as the drugs took effect. Then he was gone. My friend, in who's company I'd spent more time than any human's.

I drove home to my empty, silent house. Ryoga wouldn't be there to greet me, crying to be fed then jumping in my lap. He wouldn't curl up next to me as I slept, always being on whichever side I was facing. He wouldn't be there a couple of hours later when I woke up, asking for me to turn on the faucet in his sink while I brushed my teeth in mine.

I thought I'd lost him once. On a November night, the door to my apartment didn't catch and popped open over night. Ryoga wandered out and disappeared. Despite searching the complex and nearby woods, I couldn't find him. Then Christmas night, I was walking back from a friend's place in the same complex when I heard a familiar meow. It was Ryoga, walking down the sidewalk towards me. It was my best Christmas ever.

But this time there will be no Christmas.