A lot of this probably won't make complete sense as I've been a slacker about posting my MicroZ stuff online.

First off, MicroZ is a condensed d20 system, inspired by Microlite. The biggest difference is that I do away with the class/level system, making it skill based and using feats to define what would be class abilities. I keep some of the best aspects of the 4th Edition of the World's Most Popular RPG (4E for short) in the mechanics, namely having defenses instead of saves.

In Microlite and MicroZ, the Vancian system of magic is replaced with point fueled spell casting. In Microlite hit points are used, in MicroZ there is a separate pool of points called Focus. One of the big reasons for this was the healing loop... if someone can heal more hp than they spend to cast the healing spell, they can go on indefinitely.

Last night was my first beta test of the system and a scenario I want to run at GenCon in 2011. The group was composed of one of my alpha test players, several experienced gamers, and two players who had never played an RPG.


The good part was that the newbies were able to play the most complicated characters, both spell casters, fairly easily. The character sheets were easy to follow and the session didn't bog down for mechanics.

Overall the story of the scenario was well received. In a nutshell an undead mayor decided he was going to take a new wife, a farmer's daughter from the adjacent kingdom. It was the players' task to track her down and save her from the her wedding day.

The biggest flaw in the scenario was that the fights were too easy. The characters never felt like they were really in any danger and still had plenty of resources left at the end of the final fight.

The biggest system issue is that spell-casters need to be nerfed. They were able to blaze away with spells and didn't come close to running out of Focus. Right now I'm mulling on whether to reduce the amount of Focus characters get or raise the cost of casting. As usual interesting ideas flit through my mind that I discard to keep from complicating and bogging down the system.

The rogue feat was pretty under-powered. In the session, it gave the character +3 damage when flanking, on crits, and on surprise attacks. It never came into play, and compared to lightning bolts and searing rays, and extra +3 seemed pretty puny.

I was also concerned about the fighter feat, which adds the character's Strength bonus to the DR (damage reduction) of armor was over-powered, but the "tank" never got hit. Still, I need to revisit it, as most of the monsters would have needed a critical hit to hurt the tank.

All in all, I got a lot of good notes. I'm glad I'm doing this a year in advance rather than a week.

The rumor is out in the blogsphere and twitterverse that WotC is ceasing publication of the 4e core books in favor of the Essentials line.

Another blogger pointed out that it would make sense for WotC to stop printing the current core books because there is a ton of errata for 4e. Letting the channel run dry then starting a new print run with the books updated to include errata would make sense.

Maybe it's part of WotC's evil secret plot to ruin D&D? Or maybe it's just part of a business plan to keep selling product.

I'm just hoping I can hold on to the GenCon mojo long enough to work on MicroZ over my vacation. 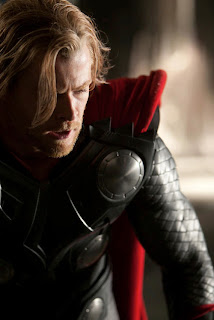 It looks like they are staying true to the Marvel version of Thor, with Asgard being a Kirbyesque fusion of magic and science.

Check out the Comic-Con trailer after the jump.

The Guild goes Bollywood in this season's music video "Game On".

The DC Universe Online cinematic trailer is out, done by Blur, the same folks that created the two awesome Star Wars: The Old Republic cinematics that we've seen. While I'm not a huge DC fan and don't plan on playing this game, I have to admit, the trailer looks pretty awesome.

Maybe Blur should start doing actual movies or episodes of something?

Joss Whedon announced at Comic-Con that he is directing the upcoming Avengers movie. He did the announcement because "Marvel can't afford the press release."

There is a lot of chatter in the gaming blogoshpere about 4e and the upcoming Essentials line. One of the items I see mentioned a lot is the DDI (D&D Interactive) Character Builder. While I have seen a great deal of praise for the tool, others bristle at the notion of having to pay a monthly fee.

I fall (or fell while I still played 4e) into the latter camp. After buying book after book at $30-$40 a pop, another $10 a month seemed like highway robbery.


The thing is, if DDI is as useful as its fans tout, maybe WotC should look at it as more of a tool to bring in more customers rather than a raw revenue stream. They could look at F2P and freemium MMOs as an example.

Dragon and Dungeon become even more useful for previews to entice customers to buy those new books. I'm sure someone with more business savvy in the field could come up with more ideas along this vein.

Vader And Yoda On Tom Tom

I couldn't decide which one to post up front, so they're both after the roundabound... I mean jump.

It looks like the money train needed some steam, so WotC is revamping 4E with their "Essentials" line. As in it's essential they get more money out of us.

Supposedly they are simplifying things to try to make the game friendlier to new players, and maybe win back some that jumped ship to Pathfinder and the plethora of home-grown OSR (Old School Renaissance) systems.

And of course nothing says simply like 5 new books and a handful of other new products.

It looks like they are simplifying characters by eliminating daily powers and tweaking how encounter powers work, and paring things down to 8 classes and 10 races. While things are supposed to be cross compatible, so you don't feel like you wasted the last $500 you spent on 4E, the new classes will not be the same as the old classes. So you need the new books.

Or you can tell them to sod off like I am doing.

You check out the info here. But I'd save your money and go here instead.

Wal-Mart In The News

Just a couple of interesting articles. The first is about how Wal-Mart has spent 2 million dollars fighting a $7,000 fine in the trampling death of one of their temp employees.

The second article has a lot of insight into Wal-Mart and is an interesting read. Anyone want to start a pool on how long until the Chicago unions try to get in the new Wal-Mart (which will be in a childhood neighborhood of mine, Pullman)?

I like the use of "dialogue instances" that keep ass-hats from messing around in your scene. The instance triggered when the large green circle appeared and was so smooth I wouldn't have noticed it if I hadn't read about it.

Found via Massively.com, check out the video after the jump. 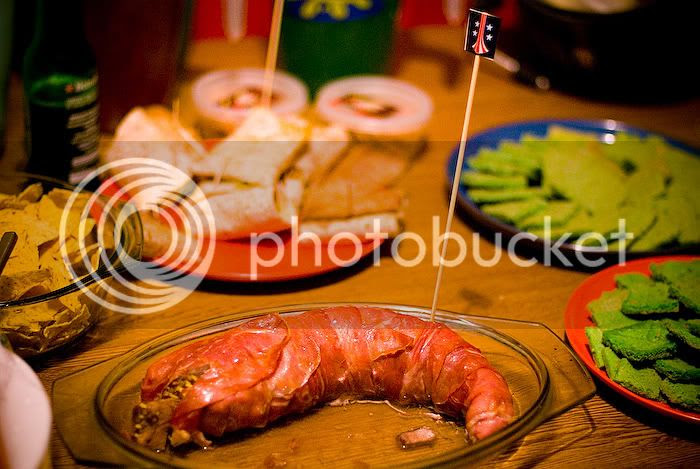 To its credit, the iPhone keeps playing music well into its destruction via the best use of green energy I've seen all day, a solar death ray.

Check out the video after the jump.